The Sky Blues started their FFA Cup defence with a workmanlike 4-2 win over Rockdale City. Despite going a goal down in the first minutes of the game, the A-League premiers never looked too troubled. 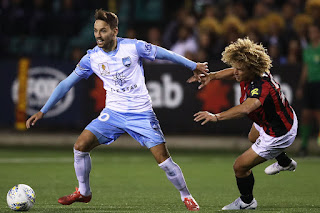 Harris Gaitatzis opened the scoring for the night, with a classy dipped shot from outside the area to put the Suns ahead. They were robust in the tackle and stopped Sydney from creating many clear cut chances in the first half.

Danny De Silva equalised for Sydney FC on 30 minutes, with a delightful volley off a deflected corner – to which Covic had no answer.

Sydney nearly went ahead before half time, with Danny De Silva finding Trent Buhagiar in space before his shot rattled off the woodwork.

The Sky Blues begun the second half well, with Ben Warland scoring off a corner routine to give advantage to Sydney. The \”baller from Gawler\” headed home a Brandon O\’Neill cross.

Within moments, Sydney went 3-1 up. Alex Brosque intercepted a loose pass, before feeding it to Ninkovic for a one-two, which resulted in the skipper toe poking past the keeper.

Fifteen minutes later, it was the Sydney captain who made it 4-1. Youngster Trent Buhagiar the provider, to give Brosque a tap-in his brace.

Rockdale pulled a goal back thanks to a terrific counter attack, to which Toufic Alameddine finished terrifically – with a low hard shot past Redmayne.

The Sydney goalkeeper was subbed off not too long after, having received a head injury during a corner. Alex Cisak made his debut for Sydney, a whole year after first signing for the club.

Despite the Sky Blues not being at their best and ultimately needing two strong 20 minute spells, they always looked the better side. Defensively fragile, but not too bad considering it was only the third game of their preseason. Rockdale played well, but ultimately the gulf in class was too much.

Danny De Silva looked strong throughout, and was constantly on the move both defending and attacking. Rockdale had no answer for his tricks and flicks, and he was always looking to make a forward pass. Very impressive debut. Strong defensive workrate.

Trent Buhagiar also enjoyed a good debut, with his pace causing problems for the Suns. Unlucky to not get on the scoresheet, but looked threatening during his 70 minutes on the pitch. Replaced by Charles Lokolingoy who looked keen to take on his man, but had no real opportunities in front of goal.

Michael Zullo had a fairly off night, with him being constantly beaten by his man. Probably the weakest performance of the night, and his worst as a Sydney player – luckily in a match that ultimately was fairly tame.

It\’s hard to take much for certain out of the FFA Cup matches, but the promising signs of Buhagiar and DDS outweighed the concerns at the back. Brosque isn\’t as pacey as he was 2-3 years ago, but showed poachers instinct to bag his brace.