Can\’t really do a proper match report, so here\’s my list of thoughts on tonight\’s friendly between Hakoah and Sydney FC. 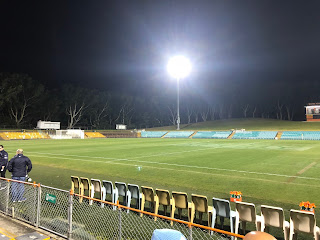 Hakoah put in a solid defensive shift, with them leaving very little room for the Sky Blues to get the ball into the box. They were robust in the tackle, and were very well organised.

Charles Lokolingoy was probably the most lively player from Sydney FC. He had a few chances and applied pressure throughout the game on Hakoah defenders. His hold up play has improved a lot during the offseason. Pace was how he got 2 of his chances – both required strong saves from the keeper.

Danny De Silva looked good on the ball, constantly finding a way past his player – with either his pace or skill. He went off injured in the second half, with a hamstring issue after attempting to stop the ball from running out of play.

Chris Zuvela was good on recovery from mistakes – strong in the tackle too. Very good passing play between him and Brillante, and then O\’Neill.

Alex Brosque played about 70 minutes, before handing the armband to Brandon O\’Neill. Captain Fantastic looked solid on the ball, didn\’t have any shots on goal.

Zullo and Retre looked pretty average, neither having much luck. Too much focus on passing the ball on the floor – maybe 2-3 aerial crosses all game.

Feel free to leave questions about the game and I\’ll answer them, either here or on my twitter @VuvuZuvela