Sydney overcame a resolute Cairns F.C. outfit in the FFA Cup 2-1, as the boys from the Tropics nearly pull off a major cupset. 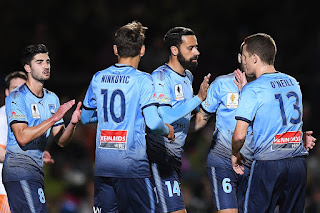 Cairns went ahead thanks to a banging goal from 18 year old Cavanagh, who slammed home a badly cleared corner. \”The Heat\” looked impressive defensively, closing down their opposition frequently, and well.

It took until the second half for the Sky Blues to equalise, with skipper Alex Brosque scoring from the penalty spot following a handball from a Cairns defender. 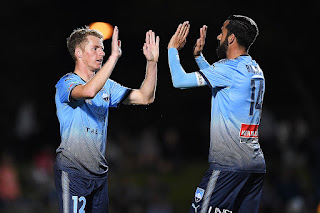 Within a few minutes, Sydney were then ahead thanks to a classy finish from youngster Trent Buhagiar. The Gosford born forward was supplied by a classy through ball from Milos Ninkovic.

However, there was still a twist left in the FFA Cup fairytale story, as Aaron Calver brought done a Cairns forward and was harshly judged to be a penalty. Up stepped Cairns\’ star striker Josh Taylor, but his effort from the spot was well saved by goalkeeper Andrew Redmayne. The \’keeper spared the blushes of Sydney FC and ensured they went home with a quarter final ticket.

Jop van der Linden took a brilliant freekick which crossed the line, but bounced out and was not given by the referee, nor linesman.

But, what did we learn from tonight\’s cup clash?

1) Sydney are in need of le Fondre

A rather toothless display in front of goal, with two non-natural strikers starting up front. They were calling out for a target man, and I feel looked most impressive when youngster Charles Lokolingoy was subbed on and created some room. \”Alfie\” could very much complete the puzzle of unlocking the goals in this team.

Andrew Redmayne cops a lot of stick from supporters, rather unfairly I feel, but always comes up when needed. His penalty save and constantly strong performance throughout the night probably showcased more the issues of the back four in front of him. Jop van der Linden and Calver had previously only played 50 minutes together (in a friendly) and clearly looked shaky. Zullo had a bit of an off night, whilst constantly on the ball, rarely able to do much with his crosses. 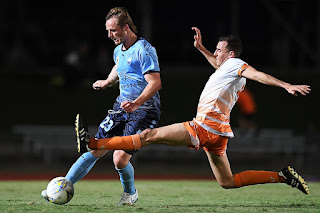 The fan favourite returned for his first competitive minutes since 2017, and looked solid. Whilst clearly not 100% fit, he showed bits of that engine we all knew well. He\’s a major asset to the club and if he performs well this year, the club will too I feel. He played 80 minutes before being subbed off for Zuvela, to an overwhelming positive reaction from social media.

A much smaller point, but Sydney lacked that Danny de Silva flair in this match. Cairns were hard to break down, similar to Rockdale, but this time around they had no silky youngster with a point to prove. Having a few more younger members playing tonight would have perhaps been a decent idea.
FINAL SCORE: Sydney FC (2) def. Cairns FC (1)
MOTM: Alex Brosque
Advertisement