Sydney scraped past Avondale in a thrilling encounter on Wednesday night, with a resilient Avondale giving the Sky Blues a real run for their money. 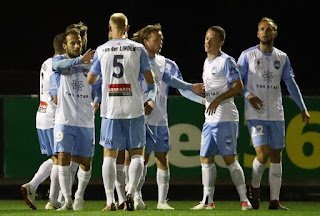 Trent Buhagiar gave Sydney the lead on 17 minutes, tapping in a cross from Adam Le Fondre, who skinned his defender and played the perfect ball across. 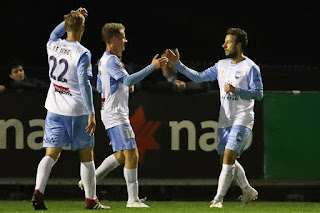 12 minutes later, the speedy youngster doubled the lead of the Sky Blues, with a terrific low finish under the keeper after being played in by Le Fondre yet again.

Sydney went into half-time with a 2-0 lead over the NPL Victoria outfit, but that wouldn\’t last long.

Boland pulled a goal back for the \”Avengers\” after capitalising on a mistake in defence from Brandon O\’Neill.

And minutes later, that man again came to haunt Sydney FC. An in-swinging corner wasn\’t dealt with properly by Sydney custodian Redmayne (who looked to have been fouled in the process) and Boland passed the ball into an empty net.

The game would need extra time to decide the winner from there – with a mistake filled  Sydney FC side struggling against a strong Avondale team.

Thankfully for the Sky Blues, Milos Ninkovic was played through by Chris Zuvela. The Serbian made no mistake as he passed his shot into the near post to give the Premiers the lead again.

Le Fondre then sealed the deal, with a clean finish into the bottom corner after a ball over the top from Josh Brilliante.

Sydney were made to work very hard for this win, but in truth it shouldn\’t be too upsetting to any Sydney supporters. This is a team that is still gelling. 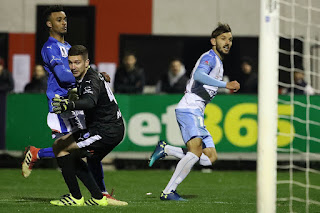 But what else did we learn from the FFA Cup Quarter Final?

1) Le Fondre is the goods

I was reminded heavily of Bobo\’s starting debut for Sydney FC against Blacktown City when watching \”Alfie\”. Two very good assists and a nice goal to top off a strong performance from the Englishman. He is clearly settling in quite well already, but has stuff he needs to improve on with the players around him. More time with Buhagiar and you can see them becoming quite a dynamic duo up front.

2) The kids are alright 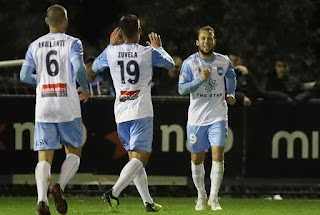 Buhagiar was very useful up front, with his pace causing problems for Avondale in the first half. They couldn\’t get near him half the time. His replacement, Charles Lokoli-Ngoy I feel put in a good shift and was part of the tide turning back in Sydney\’s favour. The classic big man / little man striking combo worked well between Alfie and Charles. I think he needs to start these matches however – it\’s much easier to get into the groove of a game from starting than coming off the bench when your side\’s just blown a 2-0 lead. Zuvela also came on in Extra Time for an injured Zullo, and looked very good in the midfield. His assist was a good sign of his ability, with him constantly looking for the right through ball.

The back four were rarely on the same wavelength with each other in the second half – to me this is indicative of structure not quite put in place yet. Dutchman Jop van der Linden looked very average and constantly made the wrong passes back to his goalkeeper, putting a lot of pressure on Redmayne to clear the ball into touch. Wilkinson and Jop in my opinion are to blame for the second goal. Redmayne made a hash of a clearance with his fists, but what are his two centrebacks doing? Watching Avondale\’s Boland pass the ball into the net. Zullo was constantly found out by the right wingers of Avondale, playing yet another poor game for Sydney in the FFA Cup. Rhyan Grant was solid, but that\’s as good as the back four got.

This is more directed at Sydney supporters, this final point. Go easy on our lads on social media. They didn\’t play up to their normal standards but that doesn\’t mean we\’re turning into a Sunday league team or that we\’re rubbish. There are certain people on twitter who consistently abuse our goalkeeper, and there are also people who consistently abuse our young players. How do you expect them to improve or feel like they\’re improving when they\’re getting told they are rubbish? Both of our Dutchmen (De Jong and Jop) have been getting quite harsh criticism too. We were spoilt by how fast Adrian fit into the club and the system last year. It is rare players have debuts as strong as Adrian did last year against Melbourne City.
We have a month until the season starts, and that\’s a long time in football. We\’ve got at least another FFA Cup match before then, and that is a lot of time for all the players to gel.
FINAL SCORE: Sydney FC (4) def. Avondale (2) A.E.T.
MOTM: Adam Le Fondre
Advertisement