The A-League is back, and it returned with a… resounding \”y-yeah?\”. 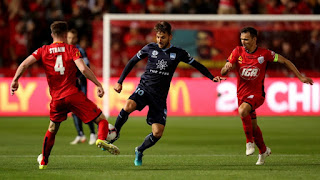 It was hardly a clash of high quality, with lots of stupid fouls conceded by both teams in the opening 45. Adelaide looked the better of the two sides, but made very few chances.

Jop van der Linden, and Michael Zullo both found themselves in the referee\’s book for stupid fouls.

Adelaide took the lead late into first half stoppage time, with Scott Galloway finding Andrew Redmayne off his line and buried his long range effort to make it 1-0.

The second half was more of the same, with Adelaide just about dominating a very disjointed and tired looking Sydney outfit. Rhyan Grant and Joshua Brilliante then both were booked in quick succession for once again, unnecessary fouls.

Sydney didn\’t seem to have an effective game plan, but counted their lucky stars when Ninkovic broke into the box and played the ball square to Adam le Fondre for a tap-in for 1-1.

A very, very, very lucky point for a Sky Blues side that looked sleepy and slow.

But what did we learn from tonight\’s match? 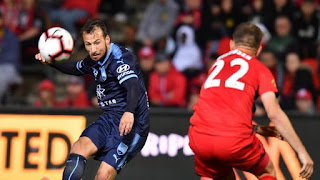 1) Give Alfie time, he will score

The Englishman marked his debut with a goal, much like his predecessor Bobo did back in 2016/17. He had very very few touches during the 90 minutes but made it count when he needed to. He is a class finisher and managed to score in a match the team looked like could serve up bugger all to him. 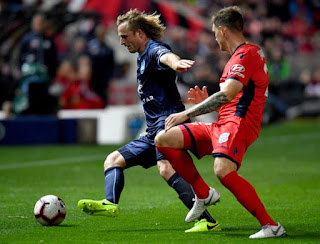 Sydney\’s back four looked completely out of tune with each other, and the midfield in front of them. Jop was often caught out of position, Wilkinson a bit stationary, Grant a bit too slow, and Zullo misplacing an awful lot of passes.

3) Who to partner le Fondre?

Brosque was mostly invisible during the match, contributing a couple of fouls and winning the odd one or two. His replacement Charlie Lokolingoy looked much more lively and found himself on the ball much more than Brosque did. Or perhaps a combo of ALF and Siem de Jong? The Dutchman played as a second striker for the majority of his time in the Netherlands, and it would suit him much more than playing on the right wing where he looked incredibly lost. 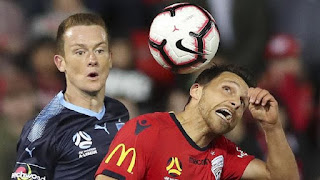 Brilliante and O\’Neill were played out of the match and were unable to do their typical pivoting runs and passes, which contributed to Sydney created nearly no chances.
The game plan was a mystery to me, with a lot of long balls that went straight to nobody in particular. On the ground, it was passing out of the back until someone misplaced a pass…and then commit a stupid foul. Wash, rinse, repeat.
The absence of Buhagiar for this season will be massive, with no pace to compliment le Fondre\’s movements off the ball.
It wasn\’t pretty, it wasn\’t good, but there\’s 26 games to go. Give them time.
FINAL SCORE: Sydney FC (1) drew with Adelaide United (1)