After a devastating loss in the FFA Cup Final on Tuesday, Sydney bounced with an emphatic 3-0 victory over Melbourne City 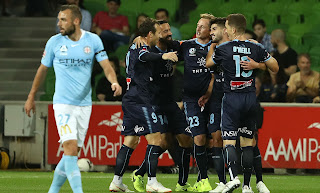 The Sky Blues got themselves into the lead on 16 minutes, with a great bit of play. Michael Zullo robs the ball off Riley McGree outside the box, plays it square to le Fondre, who then bangs one out wide to Rhyan Grant – who then took a wicked shoot which Paulo Retre backheeled into the net. They went into halftime with a 1-0 lead.

After the break, they sustained considerable pressure from City. However, City were devoid of a midfield or match winners. Their one effort on target was a skewed diving header from Dario Vidosic which Redmayne was equal to.

City were an incredible nothing going forward, and equally nothing defensively. Rhyan Grant won the ball outside City\’s box and played a square ball to Retre, who then made a smart through ball to le Fondre to double the lead. A classy finish from le Fondre, and demonstrated again why is he worth every cent Sydney pay him.

City continued to huff and puff but they were distinctly average. They\’re in desperate need of a a deep playmaker and a more classic striker. Bruno Fornaroli spent more time offside than on the ball.

le Fondre then rounded out a complete performance from the Sky Blues after receiving the ball in the box off a Ninkovic back-heel.

Another 3 points for Sydney FC, and a very good performance to go with it. But what did we learn from tonight?

Both Rhyan Grant and Paulo Retre had terrific games for Sydney FC. Both full of running, and were key to the victory. Retre\’s goal owed much to how much Grant offers wide and how he cuts into spaces. Their combination for the second goal was very clever, too. Grant bursts forward, skins a defender, and gives enough time for Retre to keep into position just outside the box to assist le Fondre. Beyond this, they look far more dynamic than any other combination in recent years down the right flank.
Retre playing in a more advanced role has been very effective I feel, with the pace out wide very much complimenting our attacking play.

The effort Brosque and le Fondre put into defending adds another layer to how hard it is to break down Sydney FC. Both of them go deep to defend, and are very willing to press, press, press. This allows for Retre and Ninkovic out wide to be more fluid with their movements off the ball and open up space when the ball is won back. Brosque had a really solid game, and his leadership up front is telling.
The back four themselves had very strong games. Jop and Wilkinson, despite a few little hiccups, always stayed organised. They played an effective offside trap which meant City got no clear-cut chances in passing play. Zullo won the ball consistently and found a lot of joy down the left wing going forward.

Alex Brosque has shown in the last week why he is the club captain. Great leadership skills, makes an effort on and off the ball, and still incredibly fit and willing to play. He turned 35 in October but his overall game has been changed little by his age. I was quite surprised to see him starting tonight, and had my doubts over his fitness but what a great performance. Full of running, and works very well up front with le Fondre. We\’re truly quite lucky to have him around. 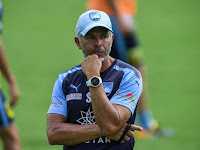 I feel Sydney were really unlucky on Tuesday night. They lost to two worldies, which you can\’t do anything about. Steve Corica has done a sensational job in the three day gap to keep the lads motivated and positive. One of Arnie\’s best traits was his ability to motivate his players, and Corica has very much inherited it. They looked set to prove yet again why they are the team to beat.