On a classic sunny day on the Central Coast, Sydney FC downed a resilient Mariners side. 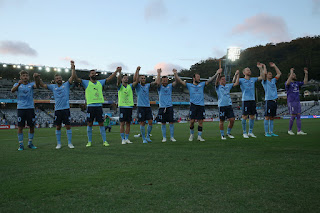 Sydney FC began he game very off the pace, and had to thank Andrew Redmayne for stopping Mariners from an opening minute goal. A ball was played in low with no Sydney defenders close enough to it, fortunately Rhyan Grant blocked the initial shot, before Jack Clisby had a second attempt, this time saved by Redmayne.

However, 14 minutes later the away side weren\’t so lucky. Another ball played into the box from the right flank, this time with no Sydney defender even paying attention allowing Matt Simon to score a tap-in for Mariners. Similar to some of the defending in the previous week\’s loss to Victory, there was a lack of cohesion between the back four. All of them were caught out of position at some point in the move.

Approaching half-time, Rhyan Grant won a penalty after a clumsy trip from Jack Clisby just inside the area. Adam le Fondre fired his penalty so hard, it didn\’t matter that Ben Kennedy got a hand on it, it rocketed into the roof of the net.

Sydney very much looked abject in the first half, and thanked their lucky stars that they had won that penalty.

The second half they looked much better, winning the ball more often and actually stringing passes together. 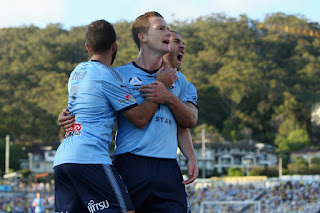 The Sky Blues took the lead in the 65th minute, with one hell of a goal from Brandon O\’Neill. The central midfielder received the ball after a short free kick routine was recycled, then took a shot from 25 yards with his left foot. Ben Kennedy dived forlornly at the shot but was no match. On a day Sydney needed some sort of magic, O\’Neill delivered it.

The worldie was enough to secure Sydney their first 3 points since the international break.

But what did we learn from today\’s game?

Since the international break, they just haven\’t clicked. A mixture of injuries, players learning the new formation and tactics, and new players in new roles and perhaps wrong players. I\’m not entirely convinced Brosque is best off starting, as I see him much more as an impact sub – especially without Carney and Simon. I suspect once de Jong is fit, he\’ll be playing as the second striker role with Brosque on the bench. He\’s perfect for a super sub as he\’s experienced, can read the game well, and can really add that edge that you need off the bench.

2) What is it with defending?

I\’m not sold on the current back four\’s performances this season. Wilkinson has seemed a bit too slow, Jop isn\’t much of an enforcer (or ball player), Zullo is caught out of position a lot, but Grant is generally solid. I don\’t want Jop to be a scapegoat, but so far he\’s yet to make himself menacing to opposition strikers like Jurman and Buijs did. His tackling very ineffectual (when not plain dumb), and he\’s too slow on the ball.

Surprisingly, we looked at our best today when Devlin, and Ivanovic had come on. The two youngsters looked good on the ball, eager to make an impression, and full of running. In Ivanovic\’s 20 odd minutes on the pitch he showed a lot of just solid skills on the ball. He put in a decent cross, looked more direct and perhaps a bit faster than Retre. We ended the game very strongly with the ball kept in the attacking half for almost the entire final 10 or so minutes.

Milos Ninkovic is without a doubt one of the best players the league has seen, and has shown that particularly since 2016/17 onwards. His ability on the ball, vision, skill, and consistency makes him a threat for opposition players. During the first half however, he rarely received the ball or got fouled. In the second half there was a lot more attention given to Ninkovic on the left flank, with the majority of the movement coming from him, and him moving more centrally when on the ball. I firmly believe Ninkovic being played out wide is a waste, and that he works better in a more classic central attacking midfielder position. The current 4-2-2-2 doesn\’t favour him, and you should be building your team in such a way that favours your two best players (le Fondre and Ninkovic).
It was far from pretty, but Sydney got the job done up on the coast.
Final score: Sydney FC (2) def. Central Coast Mariners (1)
MOTM: Milos Ninkovic
Advertisement