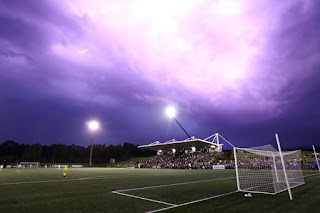 Sydney got off to a lively start against the Reds, with a lot of pace and a high pressing game. De Vanna hit the bar with a cross-turn-shot deep in the left wing. Unfortunately, lighting struck in the opening 20 minutes, forcing the game to be postponed for 40 minutes.

As soon as they got back from the break, Adelaide United hit Sydney on the counter. Latsko out-muscled Kennedy to put herself in a 1-on-1 with Bledsoe. She smoothly put it past the American \’keeper to put Adelaide 1-0 up.

Sydney were unlucky – they had started much stronger and had been passing the ball around well, on top of creating some strong chances. They battled till the death of the first half for an equaliser, and found one through Sofia Huerta who headed home from a nice Caitlin Foord cross in 45+3.

Ten minutes after halftime Sydney got themselves ahead for the first time in the match. Danielle Colaprico buried a shot after some strong lead-up play from Princess Ibini, Foord, and Savannah McCaskill.

Only 8 minutes later, Adelaide would get themselves back equal. Latsko beating Kennedy to a header which Bledsoe had no chance with. This match by this point still felt like it had plenty of goals left.

5 minutes later, Ibini won a free-kick at the byline. Colaprico aimed her free-kick to the far post, only to have it rattle off the crossbar – but back across the face of goal. McCaskill produced a diving header to put the Sky Blues back ahead yet again.

Then, the lights went out. The automatic 10pm lights-off caused a 15 minute delay, but this only seemed to make Sydney stronger.

A ball across the face of goal from the right wing met Logarzo, who had her glancing sidefoot effort hit the crossbar before Ibini buried the follow up. The substitute in the right place at the right time, and cool under pressure.

In 90+4 Ibini got herself a brace, with a low and hard effort from outside the box absolutely buried into the bottom corner.

But what did we learn from that crazy night of football?

De Vanna was unlucky that her first half effort hit the bar, but failed to then convert a fairly east tap-in opportunity before being subbed off in favour of  Princess Ibini. The 18 year-old changed the game immediately. She played a major role in the second goal, as well as constantly beating opposition defenders with her pace and skill on the ball. Her first goal showed poacher\’s instinct and incredible composure considering the kind of night it had been. The second was pure class. Ibini looks very confident when she comes on, and is perhaps the right choice to start in the left-wing spot.

Sydney created a lot of chances. Not all of them golden opportunities but over the last 2 weeks they\’ve gotten far more clinical with even half-chances. The goals have been a bit more varied too, with outside the box bangers, headed goals, tap-ins, and calm finishes. Since the 2-0 loss to Canberra they have improved considerably.

3) McCaskill has gotten into form

Savannah McCaskill was one of the 2018 NWSL Rookie of the Year finalists, but since her first round performance against Western Sydney hasn\’t quite gotten into the groove. Much like the rest of the team, she looked far more lethal tonight. Her passing was strong, she was constantly positive with the ball, and was willing to take on a lot of chances. Her goal had been a long time coming, especially after missing a decent chance in the opening 5 minutes.

I don\’t think I\’ve ever laughed more during a football match about the circumstances the game found itself in. Lighting strike delaying the match for 40 minutes? Strange, but it happens. Lights go out at 10pm due to council curfew? Stranger, and very funny. 7 goals in one match? Great. A highly entertaining match. If you aren\’t watching the W-League you\’re missing out. High quality football, nice little grounds, and sometimes you get 2 major delays in a match! 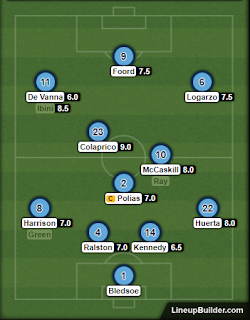