A brainsnap from Vedran Janjetovic sent Sydney FC to yet another derby delight, as the Sky Blues made it 5 straight wins against Wanderers. 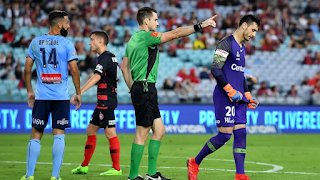 The match was delayed for close to an hour due to strong rain, with kick-off not too far off being 9pm.

The game did not start well at all for the Sky Blues yet again, with Oriol Riera scoring for Wanderers after a mix of goalkeeping error and poor defending allowed the Spaniard to get a simple tap-in off a deep free-kick.

Sydney looked second best for the opening half hour, barely able to string passes together. Janjetovic had other plans though – after failing to get the ball off le Fondre outside the box, he handballed the Englishman\’s shot from outside his area and got his marching orders. What on earth was going through his head will remain a mystery. 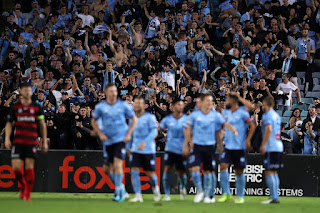 Late in the first half, a well worked short corner from Brandon O\’Neill found Brilliante who drove into the box and took a shot which bounced off the woodwork but only as far as captain Alex Brosque. A simple tap in for Sydney\’s 700th competitive goal, and got Sydney back on level terms before half-time.

Just before the hour mark, another O\’Neill corner kick caused havoc in the box. The ball found its way all the way to the far post for Siem de Jong to get a nice finish and put Sydney ahead. Two goals off corners? Insanity.

To cement this game\’s place in history, Jacob Tratt of all people scored the third goal for Sydney ensuring the win. O\’Neill\’s good corner delivery was met with a raging bull header from Tratt – one that Bobô would be proud of. Yep, three goals off corners. All in the one match.

But what did we learn from the derby?

After years of absolutely crap corners served up by Sydney\’s various set piece takers, to see three result in goals was amazing to see. We have scored so few goals from corners during the most successful period in the club\’s history – by my count only 3. O\’Neill\’s deliveries were very strong, there was some height in the box, and players willing to run at them.

The match started with Jop-Calver in the heart of defence, before the Dutchman copped a hamstring injury. Paulo Retre was brought on, with O\’Neill moved into defence to act as the ball-playing defender we\’d been so sorely missing. He did a terrific job moving the ball around, and put in some terrific blocks. One wonders whether he\’d be a good choice going forward – or if the formation should be altered to allow O\’Neill more time on the ball and further back the pitch in lieu of an actual ball playing defender.

This was a difficult match to watch – after Vedran was sent off Wanderers provided absolutely nothing and set up like an away team in a European knock-out match. Very hard to break down, and also quite heartless in their performance. Sydney ended up just toying with them outside the box for most of the second half which didn\’t make for excellent viewing.
The positive of this however, is that it gave the Sky Blues plenty of passing practice which they desperately needed after the last few weeks.

4) Does this tell us ANYTHING?

Heading into Perth away next week I am not particularly confident based off the derby performance. Had Janjetovic not been sent off I think we\’d have lost this by two or three goals. It was a wake-up call, but even then they looked sloppy until half-time. Sydney looked vulnerable when they pressed in the opening thirty minutes and I can\’t help but feel Perth will punish them much more then Wanderers (a distinctly average side). It\’s hard to know what impact this win will have on the team. My worry is they\’ll get too confident from the performance and not really learn what still isn\’t working.
Perth away next week, in what will be a very difficult encounter.
Final score: Sydney FC (3) def. WS Wanderers (1)
MOTM: Brandon O\’Neill