Design a site like this with WordPress.com
Get started
Skip to content
When Graham Arnold took over Sydney FC in 2014, he had to change a \”toxic\” culture, establish new leaders, and a new club identity. 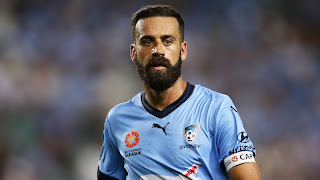 The captaincy was vacant following the retirements of Alessandro Del Piero and Terry McFlynn. Sasa Ognenovski and Nikola Petkovic were expected take up the armband. Brosque had just returned from a 3 year spell abroad, playing in Japan and the United Arab Emirates. He was a fan favourite in his first spell with Sydney FC, and before he left was named as a vice captain alongside Stuart Musialik. Brosque was a fairly quiet but well spoken player, and seemed more like the type to support a leader than a leader himself- but Arnold saw something in the striker. A bit of fan service, and a bit of long term planning from the manager. 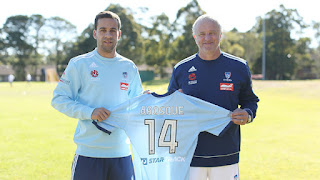 Since taking up the armband in 2014, Brosque helped spark the revolution of Sydney FC. In a play style which encourages goal scoring and flowing attacking football it was a great move to make a forward the captain. Leading from the front is what Brosque did. In a 4-2-3-1 system, he acted as somewhere between a false 9 and an attacking midfielder. In his first season back in Australia, he scored 9 goals as Sydney finished runners up in the season. Brosque wasn’t comfortable immediately with the armband and it was something he had to grow into.
In 2015/16, Brosque sustained a bad hamstring injury which left him out of the majority of the Asian Champions League matches as well as the remaining A-League season. Matt Jurman, Seb Ryall, and Shane Smeltz all took up the armband in his absence with mixed results. Jurman was a no-nonsense centrehalf and strong leader- but wasn’t what that Sydney side were lacking – they needed a player to usher in the attacking mentality.
In 2016/17 preseason, Brosque had mostly recovered from his hamstring injury. By this point, he had undergone a massive change both psychologically and physically. He now adorned a thick bush ranger Beard (now synonymous with him) and had taken a much more confident persona in the media and seemed much more confident with himself. He set the pace for the players around him and brought the best out of them.
The captain scored 11 goals – a personal record – in 2016/17. In a side which dominated possession, and pressed high up the pitch, he played a vital role in setting example. The 2017 Grand Final saw him take the first penalty in the shoot-out, once again setting example and leading his team. He buried his penalty and made sure Sydney were on the front foot. 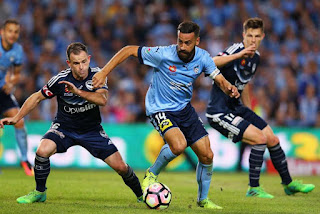 I could go on telling you about how vital he is to the team but I think when he retires will be when we truly appreciate how important he was. Replacing Brosque as captain will be an incredibly hard task and I\’m not sure we\’ll ever have a captain quite as influential as him.
Currently, he is closing in on 250 appearances all-time for Sydney – making him the highest capped Sydney FC player. That record won\’t be beaten for a long, long time. Rhyan Grant is the second highest capped currently with the club with close to 180 appearances. By the end of this season, we\’ll likely see Brosque hit 270.
He\’s heralded the most successful period this club is likely to ever have, and that cannot be understated. Since rejoining the club, he\’s lead the team to 4 trophies in 5 years. It cannot be stressed enough how important he is to this team – regardless of if he\’s starting or on the bench.
—-
Thank you for reading this rather rambley post. I\’d like to thank everyone who has donated to my ko-fi page which which helps me produce content, and produce more diverse content and pay for this website.
Follow me on twitter at @VuvuZuvela
Advertisement

2 thoughts on “An Ode To Brosque”