Sydney proved they could do it on a hot summer\’s night in Perth, with one of their best performances this season. 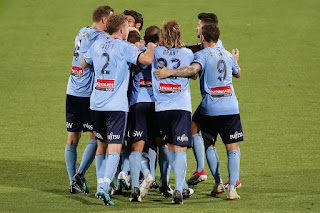 The Sky Blues took the lead in the opening 20 minutes, with a Brandon O\’Neill corner swung out to Milos Ninkovic who headed the ball into the danger area, before the ball was scuffled from Calver to le Fondre for the Englishman to strike home. Sydney scored their fourth successive goal off a corner.

Andrew Redmayne produced a top quality save from point blank range to deny Andy Keogh a certain equaliser in the 30th minute.

Sydney went into the break with that one goal lead, and frustrated the hosts throughout the match.

In the 85th minute, Danny de Silva wrapped up the 3 points just in time for Christmas. The attacking midfielder got onto the end of a clever pass from Ninkovic, danced past a defender, then slotted his finish past Reddy in goal.

There would still be drama yet to come, with Ikonomidis netting from a scrappy Perth corner in the 90th minute after the Sydney defence were caught napping at the set piece.

Glory thought they had equalised in the 93rd minute, only for the referee to blow the whistle for a clear foul on Andrew Redmayne.

Unlucky to not pick up a clean sheet, but a brilliant performance from Sydney away from home at a tough ground.

But what did we learn from the match?

Aaron Calver started alongside Alex Wilkinson in the heart of defence and didn\’t put a foot wrong. The 22 year old looked comfortable on the ball, and was sensible with his passes – never trying to be too ambitious and instead sticking to the game plan. It\’s a wonder why he wasn\’t starting to begin with – especially with how well he did to keep Keogh in his pocket.

Siem de Jong finished another strong 60 minute spell for Sydney FC, with the Dutchman doing a great job defensively in tough conditions. He went deep to get the ball, helped Grant out a lot on the wing, and was always making himself available. Very encouraging signs as he continues his return from injury.

It was clear from early on that Steve Corica had set up his team in a specific way to counter Perth – more so than any other side to face Perth had. The team pressed Glory on the ball, but allowed them a lot of time on the ball and frustrated them when they got to the final third. Brosque lead from the front with a lot of energy to press their 3 centrehalves. le Fondre too did very well holding up the ball when he got it, and offered a lot to the players around him.

4) Who will replace Grant?

Congratulations to Rhyan Grant on his 10 years service with the club, and also for his call-up to Graham Arnold\’s Socceroos squad for the Asian Cup. This is unfortunate for Sydney, as Grant has been very instrumental to their style. I think the right back spot will be hotly contested between Brilliante and Retre – both who have done a solid job there in the past. Personally I\’d prefer Brilliante as Retre looks much better in the middle of the pitch, in more attacking areas. These are positive headaches for Corica as they enter January.
A very impressive victory for Sydney, and it\’s clear the lads are gaining confidence each week and improving with de Jong and Ninkovic both available. The back four performed admirably, as did the big man in goal. The Sky Blues have a week until their next match, home at Jubilee to Roar.
Final score: Sydney FC (2) def. Perth Glory (1)
MOTM: Milos Ninkovic
Advertisement