Sydney scraped out a win against Brisbane Roar in their last hit-out of the calendar year, thanks to a brace from Adam le Fondre and penalty heroics from Andrew Redmayne. 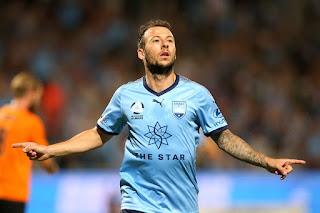 Sydney took the lead in the opening 15 minutes, after a long diagonal ball from Michael Zullo found the head of Adam le Fondre, who looped his header over Roar keeper Jamie Young.

The home side looked scrappy after that goal, and continued miscommunication between Aaron Calver and Alex Wilkinson opened up many opportunities for Roar, who eventually equalised late in the first half, after a cutback was not dealt with. McKay \”chested\” the ball into the net, however there were appeals for handball.

The second half Sydney started well, with a lot more dynamism down the left flank, which conjured up the second goal. Brandon O\’Neill played a one-two with Siem de Jong and put a low cross into the box which le Fondre dragged into the net.

Sydney were the architects of their own downfall again, with Aaron Calver making a clumsy challenge on Adam Taggart inside the box to concede a penalty in the 81st minute. Four minutes later, the penalty was finally taken – but Andrew Redmayne pulled off a great save from the spot to deny Taggart – and secure the Sky Blues all three points.

But what did we learn from it all?

Sydney opened both halves with some good football, dynamic wing play, and strong build-up around the box – but each half that evaporated after the first 20 minutes. They lacked a lot of decision making and direction after Siem de Jong came off – he really orchestrated the attacking play and worked very hard on and off the ball. The slow passing around the back 4 is more likely to cause problems in our own half rather than build up to anything in the opposition half – a lot of misplaced or heavy/light passes which caused unnecessary stress.

Ninkovic had one of the worst games I can remember him having – a lot of cheap giveaways, very slow both on and off the ball, and wasn\’t on the same wavelength as his teammates. I counted 4 times Ninkovic gave the ball away and gave Roar a clear counterattacking opportunity. It was uncharacteristic of him, too – typically even when he\’s not doing great he\’s causing the opposition problems.

Despite the enormous leadership capacities Alex Wilkinson shows overall, he hasn\’t been good enough this season. Too many times he\’s struggled to keep up with the pace of the game, and too often in no mans land when goals have been conceded. Whilst I think he and Calver are well equipped to deal with Perth Glory, they aren\’t suited to pacy #9s. Several times tonight he ignored the calls of his keeper to leave the ball for him, and went for it anyway – as well as being too quiet with Calver.

le Fondre is arguably the best striker Sydney have had – or at least the most complete striker we\’ve had. Always looking to get on the ball, always chasing defenders, and constantly well positioned. The fact he\’s scored 9 goals in the league already this season, despite being in a team much weaker than that of Bobo\’s time is incredible. It\’s pleasing to have him up front – he\’s possibly the best striker in the league at the moment.
Whilst unimpressive and nervy, Sydney showed the grit necessary to grind out a result. It\’s comforting to finally have a win at Kogarah this season.
Final score: Sydney FC (2) def. Brisbane Roar (1)
MOTM: Andrew Redmayne & Adam le Fondre
Advertisement