Sydney produced a second half to remember against a 10-man Mariners team, scoring 5 in the second half following a slow start. 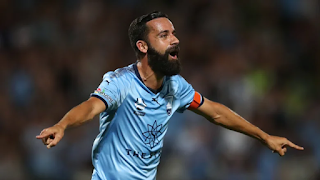 Mariners scored an opener through Connor Pain, who danced past Sydney players like they were witches hats before nailing his shot into the near post. Matt Simon involved heavily in the build up for the Coasties.

Kalifa Cisse got himself sent off after about 25 minutes, following two yellow cards. I have no clue what he was thinking – but it gave Sydney a way back into the match.

At half-time it remained 1-0 to the club from Gosford.

After the break there was an immediate bit of urgency to how Sydney played, with Alex Brosque scoring a cheeky back-heel goal on the stroke of 50 minutes after a good cross by Siem de Jong

Adam le Fondre got the Sky Blues ahead minutes later, following a lucky penalty call. The Englishman buried his penalty – he really gives the ball some violence from the spot.

le Fondre was directly involved in the Sky Blues\’ third goal, providing the assist for Alex Brosque. Brosque\’s initial header was saved by Ben Kennedy but he had no answer for the follow up shot. The captain scoring his first brace in the league since 2016/17.

Not too long later, Brosque netted a career first hat-trick, with a delightful chip over Kennedy\’s head. The skipper displayed the best of his abilities tonight, with a lot of pressing and great finishing.

Mariners pegged one back after Millar beat Zullo for pace down the wing, before squaring it to Aidan O\’Neill.

Aaron Calver scored his first career goal when O\’Neill played a corner out to Brilliante, who put a diagonal ball into the box which the centre-back volleyed into the net.

A 5 star second half performance, but what did we learn from tonight\’s match?

It\’s concerning how slow we\’ve started matches, and how directionless they look for the opening 45. Mariners are not as bad a side as their position on the table suggests – they looked very well organised until Cisse got himself sent off. I\’d wager if it weren\’t for the red card, Mariners would have scored another goal by half-time. What exactly is the cause for these slow starts? I think some of it is complacency – they might go in expecting to win each match – but they don\’t play like winners from the word go.
At half-time I was bemoaning the negative football offered up by Corica\’s starting XI, with so much time spent passing it around the back and very little time making the most of the man advantage. Credit where credit\’s due – Corica clearly saw what was wrong and had them playing well in the second half.

2) Brosque will tear you apart. Again.

At 35 years-old, few would have expected Brosque to be starting matches and playing 70 minutes – least of all himself. The captain has done a very good job leading this team, and also working alongside le Fondre. Each of his goals showcased his experience and ability, and he cannot be praised enough for how well he leads the philosophy of defend from the front. Six goals this season is more than he scored last year in the A-League (only four).

I was very impressed by the cameo of 18 year old Luke Ivanovic. He was positive on the ball, direct with his running, and showcased serious strength to ride challenges. Unlucky not to get on the scoresheet, but it\’s so encouraging to see a young player as exciting as him. I don\’t think a Sydney youth player has made such a big impression on me in a long time. Definitely one to keep an eye out for.

4) Going in for the kill

Another impressive part of the second half display in my opinion was how they weren\’t satisfied with 4 goals, or 5 goals. They continued to push for more, with Adam le Fondre a great attacking outlet for his teammates. Always available for a pass, and chased after every ball which is admirable. His Championship experience has set him up well for the A-League – I don\’t think I\’ve ever seen him look fatigued during a match and he\’s played every minute of the season.
Whilst not the biggest game of the season, nor the best opponents, Sydney finally started to show some of that deadly finishing they\’ve been showing glimpses of all season. Next up is Perth away (again) – which should be a tricky match and I think they\’d be lucky to get a point out of.
Final score: Sydney FC (5) def. Central Coast Mariners (2)
MOTM: Alex Brosque
Advertisement