After watching 4 A-League and 2 W-League matches at Jubilee Oval in Kogarah, I\’ve fallen in love with the ground – but it isn\’t without its problems.

I was fairly skeptical about the choice of Jubilee as our main stadium, especially after seeing Sydney play at Leichhardt in the FFA Cup to a very good atmosphere and general feel. My only previous experience with Jubilee had been the infamous 2-0 win over Brisbane Roar in 2011.

First game at Jubilee I saw this season was the W-League Big Blue between Sydney and Victory, which was a cracker of a match despite the result and allowed me to get an early feel of the ground. Good view from the grandstand, and an immaculate pitch.

The A-League match was a sell-out – our first non-derby match sell out I can recall. The atmosphere was brilliant too, maybe the best atmosphere I\’ve experienced in an A-League match outside of a Sydney Derby or final.

A boutique stadium is just so clearly the ideal place for any A-League club to play at. Instead of quarter-full soulless 50,000 seat stadiums, why not more 20,000 local grounds being used? Kogarah as an area seems to have really embraced Sydney FC – I feel like we\’re setting a footprint which could be invaluable for the future.

However. There are definitely a few things which need an improvement, some of which I think could realistically be done by the time we\’re scheduled to return to Moore Park and create headaches for SCG Trust.

1) Set up some food stalls, maybe a beer garden outside the stadium

On the corners of the land, particularly Park Street and English street there is green area which is at the moment empty but should be converted into another food outlet. Set up a small bar, some seats and tables, and make it another option to get a drink closer to the ground. Call it \”Emerton\’s\”, as it\’s the corner Emerton scored that freak goal at Jubilee back in 2011. Creates a bit of authenticity to the game day experience.
During the Asian Champions League the club set up some Asian food trucks on Kippax Lake which were well received by supporters. Something as simple as this would add so much to the experience of going to a Sydney FC match – especially for those who aren\’t 100% sold on attending every home match yet

2) Upgrade the big screen, add another one.

On the grandstand side of the stadium, trying to look at the pop-up screen is really hard. The screen is very small, and very far away. Over the next two years, I\’d be asking the council to upgrade that screen, or add another screen. With all the VAR nonsense in the A-League it\’d be terrific if when you\’re in the stadium you could see what they\’re taking 5 minutes to decide.

3) Get the council to hire a better food/drink supplier

This is another one ultimately Sydney as a club have very little say on, but the food/drink available at Jubilee has been pretty uninspiring and overpriced. I know it\’s cliche to complain about stadium food but it must be said. Nearly $6 for a Coke is ridiculous, I recall SFS being cheaper which is no mean feat.
Better food and drink would be brilliant. At the moment I end up eating after the match or before the match which is fine, but I think it\’s key that it be something improved.

Would be great if over the next year or two the council could slowly introduce some more seats. Some more near the hill, perhaps some temporary seats added just around the ground in general. Speaking of seats, upgrading the facilities around the stadium I feel can surely be done over a 3 year period as well. 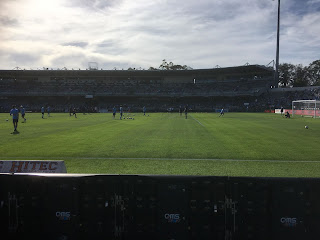 Should we even go back to Moore Park?

Moore Park is the spiritual home of the club, and it\’s always frankly not been the world\’s greatest stadium but as a supporter of Sydney FC that didn\’t matter. I was there to see football not marvel at architecture
SFS was also pretty horrible to get in and out of. Getting in from central? Well you have to wait in a line outside central to board the shuttle to the ground, which was never particularly reliable. Driving in? You have the choice of Sydney Boys / Sydney Girls, the Entertainment Quarter car-park, or the hectic looking Kippax Lake green land turned into a parking lot.
If you wished to get the train out, you\’d have to wait 20 minutes for the bus queues to empty up / for them to open more gates then get your respective service . Want to drive out? Good luck – they\’ve engineered several bottlenecks to get out of the precinct.
The SFS precinct is also kind of a dump. To get anything near decent food wise you\’re heading into the Entertainment Quarter with its fairly uninspired design and weird ghost town feel.
I\’ll always have fond memories of Sydney Football Stadium, but sometimes you have to let the past die. I don\’t see how or why us moving back to Moore Park will be any good for crowds, atmosphere, or gameday experience. We\’d never sell it out, either. Apart from the thrill in the opening 3 matches on return to Allianz we\’ll never get anything more than 17k on average.
SFS also presents the issue of the pitch being torn to shreds when the NRL and Rugby Union starts up again every year. With the club\’s ambitions to be playing consistently in Asia, we cannot be playing on such a subpar and overused pitch which feels like is rarely in good nick. Nearly every Sydney based NRL team plays their games at Moore Park and it really shows. Then you add in the Waratahs and it\’s even more of a mess.
Jubilee long-term only has one issue – the Dragons in the NRL. However, that is one team compared to four who use SFS and rip it up. The quality of Jubilee\’s pitch is easy to see as well, no more is the awkward six-yard box bobble. If SFC start positive relations with the Dragons it could really stop the horrors you see at SFS by March annually.
If the club, council, and most importantly supporters continue to enjoy the time at Jubilee, and if my suggestions are implemented I\’d see no reason to return to SFS bar derbies – and even then I\’d be fine with derbies at Kogarah.
Scarcity creates demand. Back in the old Parramatta Stadium, getting an away ticket for the derby was tough and required you to be organised. Getting the ticket itself was a minor victory. We need to replicate that. Make derbies actual sell-outs again. Make the supporters proud that they got a ticket.
—-
Thank you for reading this, I know the stadium rebuild itself is such a controversial topic I can\’t adequately do it justice in a piece about Jubilee. I\’m loving it out at Kogarah. I really am. It seems like a perfect fit for Sydney FC at the moment.
I\’m very willing to hear from those in Sydney\’s north about this situation who definitely have a bit more of a trip to get to Kogarah but I\’d feel like the brilliant matchday experience makes up for that journey. I\’m lucky in that I live in the Inner West. My journey to both SFS and Jubilee is easy as, and to get to Leichhardt Oval is realistically in walking distance.
In a dream scenario, we\’d continue playing at Jubilee, with 2-3 matches held at Leichhardt Oval every season – perhaps that as our designated FFA Cup home ground.
I\’d like to thank those who have donated to my ko-fi page, where for the price of a coffee you can donate to me and ASOTH. I\’m working hard on more diverse content and hopefully to make my passion for the club seen in what I do.
Follow me on twitter at @VuvuZuvela
Advertisement

2 thoughts on “The Jubilee Experience”