A quickfire early brace from Joel Chianese put Sydney to bed before 11pm. Whilst full credit to Perth Glory for penetrating our soft back four, there is a lot to be said about Sydney\’s complete lack of performance. 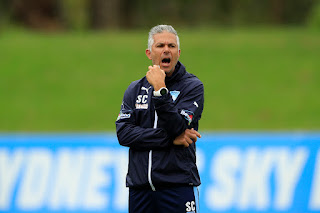 I just can\’t summarise the performance or the goals. It was pathetic. Chianese made the most of two massive defensive brainfarts to score two nice goals, before Santalab completed the rout before half-time. 3-0 was a massive compliment to how poor Sydney were. Perth were just terrific and should have been ahead by more at half-time.

The damage had already been done and Perth were happy with what they produced. Sydney got a goal back through a moment of stupid from Perth, but brilliance from Adam le Fondre. The striker picked up a loose pass and just banged one in from 20 yards out.

Zullo had a mare of a match, at fault for the first two Glory goals, both time failing to do his defensive duty to a good degree. He lost the ball and his marker more times than I can count. Throughout this season he has shown continuous issues with pacy wingers running at him. During the FFA Cup matches he struggled against any sort of speed.  Wilkinson failed to show any sort of leadership at the back, with him organising his fellow defenders so poorly I\’m wondering if he\’d played with them before. Retre looks incredibly out of place at rightback, and left a square mile of space for Jason Davidson to put in a cross for goal #1. He\’s great at right wing as discovered earlier in the season, but you can\’t expect him to slot just as well at RB against the best wingbacks in the league.

Corica is already becoming a bit predictable. Same starting XI, same tactics, and same issues. A big issue to me is that he didn\’t make any subs at halftime. There was zero change after half-time. Nothing. No subs until the 65th minute when you\’re down 3-0 is painful to see. If I were Corica, I\’d have just chucked two subs on at half-time. Give youngsters Ivanovic and De Silva adequate game-time. Hell, they might just change the flow of the match.

de Jong is a class player, as is Ninkovic but neither are being utilised well in the current formation. Ninkovic isn\’t a right midfielder. He\’s an attacking midfielder who won the Johnny Warren Medal playing as a central attacking midfielder. Corica seems dead-set on this 4-4-2 which doesn\’t bring out the best in his players. de Jong in previous clubs has played as an attacking midfielder, and during his best spell with Ajax, as a second striker. Why not employ them in their best positions? Change the formation to suit your best players, this seems obvious to me.

The opening half hour was all too similar to that horror show against the Wellington Phoenix. Undone by pace, and long balls over the top. A bit like a dog chasing its tail, you wonder when they\’re going to learn. If I (an absolute idiot) can spot these issues how can Corica and Ufuk Talay not?

Going forward, I think Sydney NEED to make changes. Brilliante has underperformed all season long, and has been more prone to defensive howlers leading to goals than goals scored or stopped. I\’d take him out of the equation, and place Paulo Retre at CM, pushing Tratt to starting RB until Grant returns from international duty. de Jong is quality but out of position, so I\’d chuck De Silva on to start. I\’d be heavily in favour of giving Ivanovic a start against Adelaide, kid has talent and isn\’t afraid to take on his man.

Just abysmal in truth. The coaching staff should know better, and the players should be doing better. Perth were class but we were the architects of our own downfall to such an amazing degree. Next match is home to Adelaide on Sunday. I\’ll be at tomorrow night\’s Sydney Derby at Leichhardt Oval, feel free to say g\’day.

On a personal note, I\’ve been incredibly grateful for all the donations over the last week on my ko-fi page. It means the world to me, and I\’m delighted that you\’re all interested in what I have to say.