Design a site like this with WordPress.com
Get started
Skip to content
A solid Sydney Derby performance from the Sky Blues saw them win 3-0 at Leichhardt Oval. 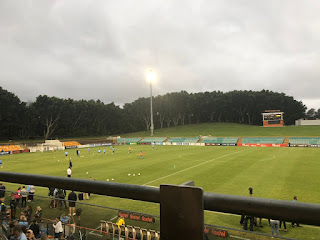 Wanderers looked more likely to score for the majority of the first half, with Bledsoe forced into a terrific save from a Servet Uzunlar dipping volley from outside the box.
Sydney took the lead before half-time, after Sofia Huerta drove inside the area and fired a powerful shot at the near post – her second goal of the season.
After the break it continued to be a case of the Wanderers holding the ball for large periods, surmounting to almost nothing. Each attacking move looked threatening until the final third.
Caitlin Foord doubled the Sky Blues\’ advantage after a terrific run, beating several players, before a terrific shot from outside the box hit the back of the net.
Wanderers soon found themselves down to 10, after Princess Ibini broke into the box before being nudged in the back resulting in a penalty. Caitlin Foord scored off the resulting spot-kick to round off a 3-0 win.
But what did we learn from tonight\’s match?

It wasn\’t the most beautiful football on display at Leichhardt but it got the job done. Sydney remained solid all around for the 90 minutes, with both Kennedy and Ralston putting in fine performances at the back. Bledsoe was reliable when called upon, as per usual.

Taylor Ray and Savannah McCaskill were both taken off for injuries in the match, which could prove to be fairly serious losses for Sydney going forward depending on the severity of the knocks. McCaskill has really started to find form again after some invisible weeks in the early parts of the season. As for Ray, she started in place of Colaprico who is off on national team duties and had done well in her previous few matches for Sydney – incredibly disappointing to see her pick up what looks to be a knee injury. Nat Tobin will likely step in at the CM spot next week.

It\’s hard to judge the performance considering just how toothless Wanderers were. Sydney really didn\’t get out of second gear for the match and ultimately rarely had to worry. It was one of those matches that WSW could have played for another 3 hours and still not have scored. Teresa Polias was really solid at defensive midfield for the Sky Blues, leading by example and constantly getting blocks in and effective tackles.

It was a pretty nice night out at Leichhardt Oval, with the pitch looking immaculate and a fairly decent Thursday night crowd of 1111. As an Inner West based Sydney supporter I was pretty pleased when I saw this match pencilled in for Leichhardt. It\’s a great little ground and the walk out of the stadium along the bay is really special at night. Looking forward to the A-League matches there.
That win sees Sydney rocket into third spot ahead of the final run-in. Big congratulations to Shay Evans who made her debut tonight for the Sky Blues. Next week they are away to Brisbane Roar at Lions Stadium in Queensland.
Thank you to everyone who has supported me on my ko-fi page. It\’s really appreciated.
Final score: Sydney FC (3) def. WS Wanderers (0)
MOTM: Teresa Polias
Advertisement