I\’ve been thoroughly enjoying this W-League season, with it being incredibly tight and exciting as well as finally being able to watch the majority of matches. But there are some things that definitely need a fix or upgrade, let\’s discuss those things. 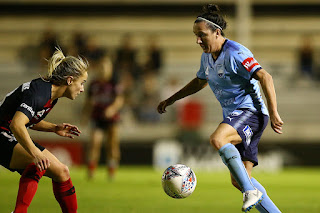 In the current format, there are 14 rounds with each team taking two bye rounds in a 9 team competition. 12 whole rounds of actually playing isn\’t good enough for the premier competition of football that\’s supplied nearly every single Matilda from the last decade. Hell, it\’s round 10 right now and the season is pretty much over! So how to you improve the season length?
There\’s two ways to go about this –
1) Expand the competition, put West Melbourne or Macarthur Rams into the competition immediately to make it a 10 team competition, meaning no more bye rounds and possibly a 27 round season just like the A-League.
2) 18 game season. One home match, one away match and two byes per season still if it\’s remaining at 9 teams.
I think it is very clear that for a competition that wishes to be seen as the best women\’s sport in Australia they need to upgrade the season and its length. The best way as well to develop players is to give them more games to play in, this seems fairly obvious to me. Australia qualified for the Women\’s World Cup, are considered dark horses to win it, and don\’t even have a full home/away season. Imagine how good this national team could be if there was a full season for them to play in at home?

2) Get more games on free-to-air

Fox isn\’t actually broadcasting every match of the W-League season, with quite a few of them ending up only available on their website to stream in terrible quality. I\’d be giving the rights out to ABC, SBS, or current A-League FTA partner Channel 10. Kids need to be able to see players like Sam Kerr without having to have their parents pay for Foxtel.
I\’m of the opinion that all national team matches, both Matildas and Roos should be available on free-to-air. It\’s about putting football into the public\’s view. With the highest grassroots participation number in the country, football from Australia isn\’t in the view of the public much. You\’re more likely to see a cheap Messi or Ronaldo jersey than to see any Australian club or national team jersey and that needs to change. Free-to-air coverage would definitely help.

3) Be smarter with double headers

I really enjoy double headers as a fan because watching football is great and I\’d love to do it all day if I could. The idea of watching two matches back-to-back in a stadium is really appealing. W-League / A-League double headers just haven\’t been utilised as well as they could be, in my opinion.
In the height of summer our best players are forced to play in extreme heat on incredibly sunny days which highly impacts the quality of the match. Instead of the W-League kicking off before A-League matches in the height of summer, put them on after. Let the players not have to roast in 35 degree heat. This also ties into my next point…

4) Treat the players with respect

It\’s hard to think that the FFA care much about the W-League when they let matches like Perth vs Sydney to go ahead in 35 degree heat on a 3pm Friday afternoon. They don\’t show the players enough respect with stuff like this and seriously risk player welfare. 3 times this last month the referee has had to be subbed off at halftime due to suffering from dehydration and the scorching sun.
Water breaks seem to be a bandaid over a giant, massive crack. If you\’re at the point that you feel a need to have water breaks up to twice per half, shouldn\’t you just push the match back by 20-30 minutes? In the A-League Sydney Derby there was a massive downfall of rain which would have seriously affected quality of football and player welfare. They delayed that match by an hour. Why don\’t we treat the women with the same respect?
In addition, continue to increase the wages of players and the cap. These are proper athletes who put in just as much dedication and hard work as the men, and should be paid sufficiently to match that. If the A-League\’s CCM who are yet to win a match this season are getting paid more than the top team of the W-League there is a big issue.
– – – –
Thank you for reading this article, and I hope you\’ve enjoyed this fairly short read. I\’m very excited about the Matildas at the upcoming World Cup and you feel that if they perform as good as they can they have a decent shout of getting far into the competition.
I\’d like to thank everyone who has donated to my ko-fi page. It is very much appreciated and I\’m working on creating more content constantly.
Follow me on twitter at @VuvuZuvela.
Advertisement

2 thoughts on “How To Improve The W-League”