Welcome to part 2 of the \”How To Fix Australian Football\” editorial. Today\’s topic is about Australian sporting culture. Read part 1 here.

Australians love sport we’re told. ALL sports. I’m not so sure. It’s more that Australians love winning at sport – especially at a national level. Somehow it proves that Australia is fabulous and superior to all others. If we look at the predominant football codes enjoyed in this country the one thing they have in common is lack of competition.

Australia is the king of AFL. It’s only played in one country. It even makes up an alternative set of rules so that it can play an Irish Gaelic Football team once a year. Recently AFL discovered Asia (well China) and Women – AFLW. AFL owns the media and has amazing attendances. It also has the same old teams playing year in year out without ever facing the risk of playing any foreign teams and being found out. It is a great white shark in a fishpond.

The height of Rugby League is arguably the State of Origin. When a World Cup happens it is made up of countries who acquire players of other nationalities to help make up the numbers. A test match team – Great Britain – is split into its component countries to flesh out the numbers. In Britain the game is mainly the preserve of two counties – Yorkshire and Lancashire – to the extent that southerners know nothing about it.

Generally, Australia expects to win the Rugby League World Cup. It is one of maybe four decent teams in the world and delivers a mild frisson of international excitement to middle Australia without any prolonged expectations of failure.

Then we have Rugby Union – a code on the run in Australia as it faces a crisis of failure on the World Stage. Of course there are still probably only eight countries that might expect to win the World Cup but Australia can be assured of at least a quarter final every time.

Football, though is a different issue. There are probably up to 100 countries that are genuinely competitive and the nature of the fine margins in the game dictate that in a one off, there is a chance that anyone can beat anyone else. This threatens the local view of Australian sporting superiority and challenges middle Australia to the extent that it runs back to its comfort zone once Australia has been eliminated.

What’s worse is that this xenophobia drives the sporting cultural cringe. 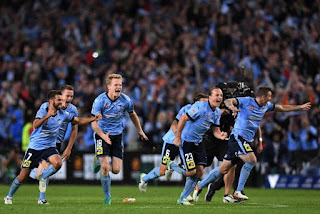 When I first took up coaching, I was astonished to discover the existence of the “Finals Series” concept in Australian football. This, I was assured, was the Australian way. It’s not the global football way – appearing in some forms in only a handful of other places. I believe it fuels mediocrity and drives conservatism.

This can occur at grass roots level where previously free scoring teams (and I am talking under 10-14’s) suddenly find it hard to score as teams become determined to minimise the damage by negative play – hoping to steal a win against the run of play.

Extend this to the A-League where mysteriously 6 out of 10 teams qualify and we recently saw the fourth place team win the “championship”. That this came about due to VAR failure hides an issue that has been prevalent in the A-League for years. This is that once the finals start everything changes. Teams don’t want to over commit, they commit more fouls (helped because referees are more lenient), and it becomes a war of attrition. In other words, there is more conservatism, cynicism and defensiveness. Sounds like an Australian World Cup Campaign.

What’s the point of a 27 game season when it all comes down to a bizarre sudden death knock out ritual? The hype around the NRL and AFL Finals series is laughable. Do those sports truly believe that the best team ISN’T the one that came top?

The other codes may be more forgiving. Certainly, my experience of Rugby Union (I do follow Union) is that the best team is more likely to win a match. I believe this is true of the other codes. Obviously, AFL’s lack of a full home and away season can excuse this a little – except when you understand that even this is skewed by the outcome of the previous season. This makes football’s use of the finals series concept an even more significant cultural cringe as it uses a process adopted by other sports to counteract the lack of competition.

The finals series concept is just not football. Clearly football fans don’t buy in to it that much as they are largely poorly attended except for the final. What it is, is an Australian Football Code system fuelled by isolation, few teams (fuelled by low population density), a subsequent lack of promotion and relegation and now a modern media desire for extra games and ratings. The other codes benefit because their nature leads to the best team usually winning. Football’s fine margins dictate that this is not often the case – further adding to the risk of highly conservative mistake avoiding football.
So why do we have final series? Because it is expected in Australian Sporting culture and not because it is Football culture.

Australian football needs to find a way to move away from the concept. Football culture is about first past the post and promotion and relegation. We need to get these special elements in to the game as quickly as possible and broaden the geographical appeal of the game. Let’s get Tasmania involved, or Canberra. Let’s not expand with another Sydney team. That’s an NRL thing. Leave them to it.
We should also embrace the FFA Cup. This was started due to fan pressure and whilst it’s developing slowly is becoming another key differentiator for the game. The idea of amateur teams competing with the professionals is not found in AFL or NRL. Those codes feature just the same old teams year in and year out.

Then there is a public’s apathy for the Asian Champions League. It gets no coverage and attendance are very poor, yet it encapsulates the path to glory that football uniquely offers. From Local, to National to Regional to the World. Yet it seems that Australians just want another trip to Port Adelaide or Wigan if they’re lucky.

Thank you for reading part 2 of this piece. It\’s a massive project and I\’m hoping people reading this have started to think more about the Australian sporting landscape and how it has affected football.

The next part will be published within the week, and so far all the feedback has been very much noted and I\’m hoping you\’re still interested.

1 thought on “EDITORIAL: How To Fix Australian Football (Part 2)”