Sydney proved they could do it on a windy night in Wellington, with a narrow 1-0 win. 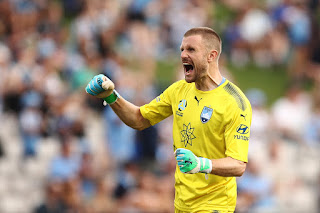 The Sky Blues started fairly organised, with a lot of smart pressing and strong defending. Sydney got a perhaps surprise lead, when a deep free-kick from Brandon O\’Neill met the feet of Calver who squared it for Siem de Jong to score. The Dutchman was caught late as he scored, with him being forced off immediately for a knee injury. Very unlucky and downright heartbreaking, he had been playing very well as of late and really started to show how good he is.

The second half was mostly defence vs attack, with Nix desperate to grab an equaliser. Sydney stood firm and defended well. Warland, Wilkinson, and O\’Neill all putting in terrific shifts for the away side.

Late in the match, a dubious penalty was awarded to Wellington Phoenix, as Steven Taylor got tripped up by Michael Zullo – however there are questions to be asked about him committing a foul on Zullo before he got tripped.

Roy Krishna stepped up, and had his penalty well-saved by Andrew Redmayne. The Sydney #1 has been very impressive in recent weeks, with a lot of clutch saves which have really saved some points.

The match ended 1-0 to the away side, with de Jong bittersweet effort grabbing the victory.

But what did we learn from tonight\’s action at Westpac Stadium?

Ben Warland put in a great performance on his first start since return from injury. The Baller from Gawler worked very well alongside Alex Wilkinson in the heart of defence. Having a left-footed player at the left centreback position was good to see and it made a difference. I believe he is now surely the first choice centreback.

A major positive in how Sydney performed was it proved to me they can really do the backs-to-the-wall defensive football needed in the Asian Champions League later this season. Adam le Fondre and Alex Brosque both defended well from the front, and Danny De Silva and Milos Ninkovic both put in good performances. I thought O\’Neill and Brillante both had very strong matches and they looked much more comfortable. O\’Neill is incredibly consistent we\’re quite lucky to have him around, and I\’m hopeful we can keep him on for a few more years.

4) What is handball anymore?

I usually don\’t like the talk about refereeing decisions, but this is more of a rant. What exactly is a handball penalty anymore? Does it need to be deliberate? Arm in unnatural position? Any time it hits the arm? It\’s very confusing watching football sometimes. I sympathise with the on-pitch referee but his calls for both penalties were quite confusing. I\’m eager to see the explanation for his decisions.

Andrew Redmayne has been the difference in a lot of matches this season. He\’s been really great when we absolutely need him, and has been reliable. Exactly what you\’d want in a goalkeeper. The boo boys have been forced to eat their words in recent weeks. In the immortal words of Jacob Tratt – thank f*ck for Redders.

A strong performance from a travelling Sydney FC side who clearly set up well tactically. Next is the Australia Day Big Blue at AAMI Park. A big test and a chance to solidify the 2nd spot on the table before we head into February.

Thank you to everyone who has supported me on my ko-fi page. It is very much appreciated.