Sydney succumbed to defeat in Melbourne, after two class strikes from Victory left the Sky Blues with all the work to do. 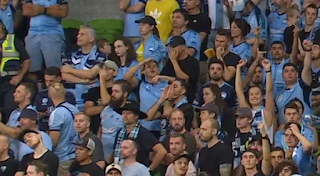 Sydney started slowly and without much organisation. A stellar free-kick from the Swedish Chef Ola Toivonen put the Vuck ahead – a fantastic strike which Redmayne and the wall could do nothing about.
Sydney went into half-time a goal down, and with a very poor performance overall.
After the break, Luke Ivanovic was introduced for Danny De Silva who didn\’t have one of his best performances in Sky Blue.
James Troisi gave Victory breathing room with a strike from outside the area which took a deflection as it went in.
A near immediate reply as Milos Ninkovic received the ball from Aaron Calver and had his initial effort save before converting from a tight angle.
Despite a flurry of chances and a lot of woodwork being hit Sydney just couldn\’t get an equaliser. Both Ivanovic and le Fondre came close, and Lokolingoy nearly got himself a goal but was held back before he could reach the ball for a potential tap-in
Full time 2-1 to the home side in a tough match.
But what did we learn from tonight?

1) Ivanovic is still a gun

Luke Ivanovic\’s introduction just after half-time was the catalyst for change, with the 18 year old winger putting in a top performance. He was full of running, smart on the ball, powerful, and positive. I can\’t recall many 18 year old players putting in a shift that good for the club since the days of Brendan Gan or Rhyan Grant. Definitely think he should start next week.

The first half was very frustrating to watch. A lot of hospital balls around the midfield and a lack of potency on the wings. Zullo in particular was very poor overall, and struggled to get any decent balls into the box. Every attacking move down the left flank was slow and sideways. Ninkovic and Zullo constantly exchanging the ball with each other without feeding le Fondre in the box meant he was starved of service.

The foul which lead to the free-kick Toivonen scored off was one that didn\’t need to happen. There was very little need to bring down the man and it smacked of lack of discipline. Throughout the match Sydney committed dumb fouls in areas they didn\’t need to. I think this stems from the formation feeling so open. Victory\’s front three had pretty much no issues getting past our midfield duo or our full-backs.

It seems like matches against our greatest rivals has lead to some of our poorest moments. From inability to defend in that fateful semi-final last year to the poor defending in the match at Kogarah – it feels like we\’re in a chain. Muscat has the wood over Corica, whose inexperience really shows in matches like these. It was not a terrible, awful, disgustingly bad performance but it felt like there was no fight or drive at times. Buggered if I know what the game plan was meant to be in that opening 45.

Without our bearded captain Alex Brosque there was little leadership up front, the place which is so vital to our typical playstyle. I\’ve said in the past how vital it is for us to have a captain playing up the front end of the pitch. They dictate the style and also with how offensively we like to play, keeps opposition defenders fearful. Alex Wilkinson is a much quieter leader, and from the heart of defence doesn\’t do the job for me. He\’s not having his best season but so often I felt like he just didn\’t organise the players around him.
Even with glimpses of hope in that second half, I just feel like we aren\’t at the level of Melbourne Victory or Perth Glory – neither of whom had their best XI on the pitch when we played them. Next up is Melbourne City at home, in our final A-League match at Kogarah. Having watched 50 odd minutes of their match against Nix, they are beatable.
Apologies if this came off as really negative, but seeing us struggle in matches against our biggest rivals is a real dampener. I\’m sure the lads will be able to bounce back next week.
On a personal note, I will be having surgery on the 4th of February and will likely not be able to put out much content in the coming weeks as I recover. If you\’re interested in writing for ASOTH over the next month please let me know.
Final score: Melbourne Victory (2) def. Sydney FC (1)
MOTM: Brandon O\’Neill
Thank you to everyone who has supported me on ko-fi. It means a lot to me.
Follow me on twitter at @VuvuZuvela
Advertisement