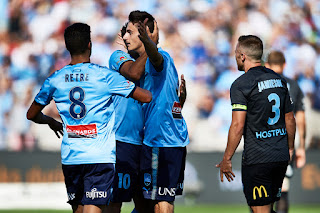 Sydney started incredibly strongly. Ninkovic got the ball on the counter, and fed it to Ivanovic who buried his shot into the back of the net for his first senior goal in the 8th minute.

The youngster unfortunately came off 20 minutes later, having suffered a head injury and a hamstring complaint. The Sky Blues went into half-time 1-0 up in a rather dull half.

City were strong on the ball in the second half, but were toothless up front. They won a penalty with ten minutes to go after a player was pulled down in the box at a corner. Riley McGree took the ensuing penalty, only for Andrew Redmayne to yet again come up big and save it.

Moments later, Adam le Fondre sealed the win for the Sky Blues with a neat finish through the legs of Galekovic. 3 points secured for Sydney.

But what did we learn from tonight\’s action?

After a few months of looking wobbly at the back, it seems Sydney have started to click in defence. The return of Ben Warland from injury coincided with 3 clean sheets from 4 matches played, and there is just such a visible difference. He looks comfortable on the ball, is no nonsense, and having a left footed defender is so good. Very good performance from him and Wilkinson in the heart of defence.

Rhyan Grant made his long awaited return to Sydney FC following his time with the Roos in the United Arab Emirates for the Asian Cup. A stand out for the national team, and a stand out today for Sydney FC. His engine is just so impressive. The way he goes up and down the pitch, puts in the big tackles, and picks the passes is just great to watch. We\’ve sorely missed his dynamism on the right flank. Welcome back, Rhyno.

The last month and a half has been a terrific one for Andrew Redmayne. The keeper has gotten 3 clean sheets over the last 4 weeks, and has been a menace for opposition penalty takers. Out of the 5 penalties he\’s faced this season, he has saved 4 (inc. FFA Cup). Not just penalty saves either – pretty much every match this last month or two he\’s been forced to make 2-3 great saves in crucial moments. A dark horse perhaps for best keeper in the league?

4) He scores when he wants

Despite playing overall not his best game for the club, le Fondre still managed to score a goal. His overall workrate was admirable as per usual and he showed the Northerner grit necessary throughout. Watching him get hacked down and immediately get back up is brilliant to see. His goal was a smart one, beating a defender before slotting it calmly into the net. I think he\’s been missing Brosque up front with him – and to see Ivanovic go off so early definitely made it harder for the Englishman. Hopefully the introduction of Reza Ghoochannejhad next week can start to make things right.
Not a pretty performance from Sydney – similar in truth to the winning performances against Jets and Adelaide – but a win nonetheless. Seeing us grind out results makes me fairly happy in truth, and it shows that there is still a massive amount of heart in the team. Next up is away to Brisbane on Friday.
Thank you to everyone who has supported me on ko-fi. It is very much appreciated and goes a long way.
Follow me on twitter at @jamie_dunkin.
Advertisement