In one of the most entertaining finals to date, Sydney came out on top against Perth Glory, to deliver their first championship in several years. 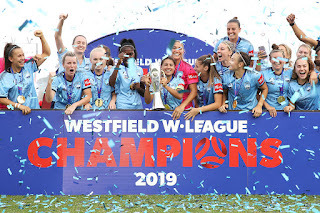 The Sky Blues got off to a cracking start, as Sofia Huerta shot an absolute rocket into the top corner following a lay-off from Savannah McCaskill. Her second goal in as many weeks, following her heroics in the semi-final to book our ticket to the final.
Perth Glory won a penalty after a poor tackle in the box not long after. Sam Kerr stepped up and dispatched the spot kick no worries, to put it back on level pegging.
Not long before half-time, Caitlin Foord playing a smart through ball over the top which Savannah McCaskill headed over Campbell and into the back of the net. An incredibly smart goal from McCaskill, who was so clearly on the same wavelength as Foord. 2-1 at halftime to Sydney.
The #10 then bagged her brace after half-time, when a poorly defended second phase of a corner lead the ball to drop at her feet for a clinical finish. The American was absolutely on fire.
Glory got a goal back, after a poorly defended corner allowed Mautz to loop the ball over the keeper from an awkward strike. 3-2 to 20 to go…
All but 2 minutes later, Sydney regained their 2 goal lead. Chloe Logarzo buried her shot into the top corner from just outside the box following a failed defensive header from Mautz (who had just scored).
Sydney hung on in, and prevailed attack, after attack, after attack from Perth Glory. The championship trophy will be staying home in Sydney.
But what did we learn?

American import Savannah McCaskill gave one of her career best performances in the W-League final in truth. A great display of goal scoring, good passing, pressing, an assist, and nuisance factor made her impossible to deal with for Perth. With how often Sydney rotate Foord and McCaskill\’s positions up front they were kept guessing. The looping header for McCaskill\’s first was just class. It was pure instinct as well, she didn\’t try and chest it down and control it, she knew the keeper was off her line and just went for it. Her overall workrate was admirable too. I wish her all the best back in the NWSL, and hope to see her back in Sky Blue next season.

Experience was ultimately the difference between the two sides across the pitch, but no section more so than midfield. Sydney\’s midfield trio of Polias, Colaprico, and Logarzo controlled the game entirely. Effective tackling, good passing, good pressing, and great organisation from Polias in particular. Colaprico is very smart on the ball, and was positive and lively. I feel if it weren\’t for those 3 players Sydney would not have been able to win today.

Last year\’s Grand Final loss to Melbourne City was a tough one to take. Sydney should have won that one, and the players were good enough, but the scales were tipped by how good City\’s import players were. Ante Juric clearly learnt from that and used up all four of his visa spots for this season, and those four got the job done today. Sofia Huerta, Danny Colaprico, Aubrey Bledsoe, and Savannah McCaskill are just class players and I do believe without the four of them we probably wouldn\’t have made the finals in the first place.
Bledsoe in confirmed to play another year at Sydney, following a 2 year loan agreement starting this season. McCaskill, Colaprico, and Huerta will all hopefully return, following the end of the NWSL season in America. Best of luck to all four of them back home.

That was probably the most exciting, high quality, and enjoyable Finals Series match I\’ve seen live from either Sydney team. Each side were strong and really went for it, and I\’m very glad to have finally seen Sam Kerr play live. There was such an openness to the game and even in those 4 minutes of stoppage time you always felt like the crazy could have happened. That\’s the magic of The Dub. It really feels like anything can happen and you cannot write off any of the top four sides.
A great day out at Jubilee, all in all. I\’m very pleased for captain Teresa Polias in particular to lift that trophy after last year\’s heartbreak against City. She\’s a terrific leader and put in a great performance today, as did everyone in Sky Blue.
Final score: Sydney FC (4) def. Perth Glory (2)
MOTM: Savannah McCaskill
Advertisement