A solid, hearty, and strong Central Coast Mariners side managed to fight off an uninspiring Sydney side, in a 1-1 draw at Leichhardt Oval. 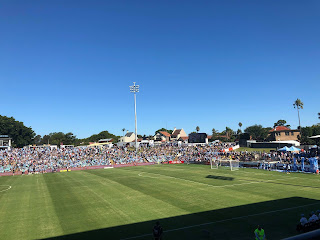 Sydney has plenty of chances on the goal mouth in the opening 30, but were completely outdone by the second phase of a corner. Aidan O’Neill took a shot first time, and his low hard effort scrambled in after a deflection. Half time, 1-0 to the visitors.

Alex Brosque was taken down inside the box late in the second half, and Adam le Fondre dispatched his penalty.

Ninkovic missed another sitter at the death of the game in a 1-on-1 which saw the game end 1-1.

But what did we learn?

Throughout this season Corica has been stubborn with his game plan. But it clearly isn’t working. Annoyingly, he doesn’t adapt to the situation. The day he changes his formation mid match will probably also be the day that we win the Club World Cup. This is such s clear issue heading into our Asian Champions League campaign. I can seriously see us getting our asses handed to us by the giants of Asia.

If he truly absolutely believes this is the way he wants them to play, pick players that fit that formation or at least ones that aren’t serial cock-up merchants. Brillante is just not good enough to start and I don’t think he’s deserving of a new contract come seasons end.

Wilkinson has been quite disappointing as our stand in captain. Not vocal enough, doesn\’t organise his team, and makes limited impact on how we play. I would consider giving the armband to someone with more fire in them to lead. If Brosque isn\’t going to start, I think give it to Grant who has some of the heart we need – or le Fondre with his vast experience.

2) What To Do With Gucci

Reza Ghoochannejhad is clearly a good player, but I’m wondering if he was a panic signing from Corica judging by how he’s being played. In all honesty, I think he would be better off playing Reza at LW, instead of Ninkovic. 60-ish minutes today and he can’t do much against four absolute beanpole defenders. Still hopeful he can be our X Factor.

3) What happened to crossing?

It’s quite stunning how our crossing has dropped off in the last year. From having Zullo up there for most assists last season to now having him incapable of getting it into a player. There’s no more Bobô to aim for and it feels like he forgets that? Alfie can our himself about but he isn’t a 6 foot 2 Brazilian. Wilkinson doesn\’t go up for corners so you also lose valuable height in those situations – at corners you should be really using your big defenders.

I talk a big game in how I’m criticising the team but I just do not want ya to continue how we are. I propose either a change to a 4-3-3 or 4-2-3-1. I’ll entertain you with how I’d set them up in both scenarios.

4-2-3-1 which pushes Ninkovic central as a #10, with Ivanovic and Ghoochannejhad out wide. Caceres partnering O’Neill in the middle. If possible, Zullo out for Joel King at left back or just Grant as an inverted full back and then Tratt at RB. Jacob Tratt would also help us out at our set pieces. He’s scored off 2 corners and is a threat. Players don’t know how to deal with him. If Ninkovic continues to struggle, get Siem to start ahead of him.

Essentially, this version would see them play like the W-League side. Rotating around the front three, an enforcer DM right in front of the back four, and Ninkovic as a deep lying playmaker, alongside Retre. Ninkovic creating chances centrally, and some pace from Retre to get the ball around and to press. Ivanovic, Le Fondre, and Gucci as the front three. The key with them will be to rotate between them throughout the 90, as Foord and McCaskill do in particular for the W-League.

Bench: Cisak, Calver, Caceres, Brosque, de Jong
– – – –
I\’m not mad, just disappointed. This team is capable of so much better, but due to bad tactics, poor player performances, and pointless possession stats we\’ve just shrivelled up. Corica has a tough task ahead of him, with Nix up next, I\’ve got low expectations are dropping points to the 10th, and 9th placed teams in the league on the trot.
Personal note, this has been a tumultuous few weeks. Due to recovery I\’m still not 100% there and really struggled today after football the previous day. Getting better slowly, but it feels like an eternity.
Thank you to everyone who has supported me on my ko-fi page. I really appreciate it and I hope you continue to enjoy what I\’m writing and making.
Final score: Sydney FC 1-1 CC Mariners
MOTM: Rhyan Grant
Follow me on twitter at @jamie_dunkin.
Advertisement