Sydney got the points against Wellington \”away\” at Campbelltown Sports Stadium, on a windy night out west. 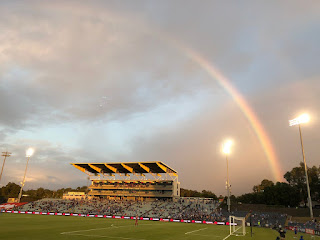 A mostly drab first half produced one moment of note, with Wellington denied an opener due to a (pretty spot on) offside call from the linesman.
A flurry of chances were missed by the Sky Blues in the first half, but Sydney broke the deadlock in the second. Captain Alex Brosque was subbed on and made a near immediate impact, with his attempt to round the keeper in the box winning Sydney a penalty. Adam le Fondre stepped up, and absolutely nailed it into the net, off the crossbar.
The Sky Blues hung on against a resilient and well structured Phoenix team. Krishna looked a threat whenever on the ball, but alas, could not convert any chances. Full time 1-0 to the \”visitors\”.
But what did we learn from today?

It seemed to be overall a good performance from the back four. Wilkinson lead by example and really did a good job of shutting down attacks, getting in crucial blocks, and getting the team to play out a bit faster. After how pedestrian the passing from defence was, it was a very welcome change. Zullo put in a good shift at left back, and Rhyan Grant was his usual industrious self down the flanks.

It\’s been a weird season for Sydney with their front 2. Pre-season was le Fondre / Buhagiar, then due to injury Brosque stepped in, then Siem de Jong has started with ALF, and now Reza Ghoochannejhad partnering the Englishman. With the other injuries around the squad it\’s not surprising things aren\’t clicking up front, but the chances wasted today highlight some issues. Three clear goal scoring opportunities all ended in nothing, one which was pretty much just a tap-in.

Thought the captain made a very good effort off the bench tonight, and was definitely what won Sydney the match. His leadership up front is sorely needed, and that\’s his second penalty win in as many weeks. He knows how to get into the position to win them, the penalty he won this week was prime Brosque. Round the keeper. Good stuff from the skipper.

Campbelltown Sports Stadium is pretty great little ground for the A-League. Whilst open to the elements, the pitch was in decent quality and the seats are close to the pitch. Something I loved was this really neat small beer garden inside the stadium, just next to the away Cove. Just a smart idea and stuff like that adds to the experience. The crowd was 5115, fairly respectable considering how goddamn random the match location was. Not sure how much we can read into that with South West Sydney coming into the fold in a few years time – where will the fans come from? What will be their identity?
Sydney did just enough right to secure the points, but the issues of recent weeks are definitely still there. Our inability to convert from open play could prove costly, especially with an Asian campaign coming up.
Final score: Sydney FC (1) def. Wellington Phoenix (0)
MOTM: Alex Wilkinson
Thank you everyone for the support, I very much appreciate it.
Follow me on twitter at @jamie_dunkin
Advertisement