On an incredibly windy Wednesday night in Kogarah, Sydney took a point from their opening Champions League game. 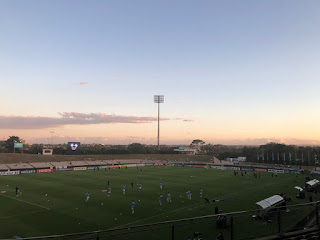 The match was fairly open and quite clean overall, and Ulsan didn\’t really give Sydney too much to fret over. Sydney definitely should have been able to nick all three points, but it just didn\’t all click.
Full time, it finished 0-0. But what did we learn?

Sydney again faced the same issues as they have for most of this season – slow on the ball, indecisive offensively, and prone to dumb turnovers. For a side with an attacking duo of Adam le Fondre and Reza Ghoochannejhad, you\’d expect them to be used far more. Both of them made runs that went completely unnoticed and unused, some of which could have changed the game.

The back four all did their job well, and denied Ulsan from any clear goal scoring opportunities. Wilkinson and Warland both looked very comfortable on the ball, and won almost every challenge they went in for. Without a doubt, they are our best central defensive combo.

The wind had such a major effect on the quality of football played, and I can\’t remember a windier match I\’ve been to in a professional game. Every goal kick from the Ulsan goalkeeper went either straight into the touch, or dawdled in the air. Sydney\’s best effort on goal was an in-swinging corner from Brandon O\’Neill.

I don\’t ever think I\’ll get the apathy towards the Asian Champions League from supporters. In a league with just 10 teams, and 27 rounds we always complain about it being stale – yet when we get Champions League football with clubs from all over Asia we just don\’t care? To me there is nothing better than being able to watch continental football against clubs from places I\’d love to visit. But hey, that\’s just me.
Whilst a bit frustrating to only walk away with a point, it\’s a hell of a lot better than how we started last year. I expected a 엉덩이 떨기 from this match and we got a solid performance in a 0-0. The trip to Japan next week against Kawasaki Frontale could be a ロバブラスト but should Sydney remain defensively well organised they could sneak a point.
Final score: Sydney FC 0-0 Ulsan Hyundai
MOTM: Rhyan Grant
Follow me on twitter at @jamie_dunkin.
Advertisement