Sydney FC were unable to break their Japanese hoodoo against Kawasaki Frontale, falling to a late 1-0 loss. 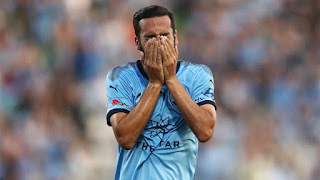 It was a backs-to-the-wall job for the away side, with Kawasaki enjoying the majority of possession throughout both halves.

After a flurry of terrific saves from Sydney goalkeeper Andrew Redmayne, Kawasaki were able to nick the three points late on when the Australian side struggled to clear a ball.

But what did we learn from tonight\’s game?

1) What does Caceres add?

I really am at a loss as to why Anthony Caceres is our starting right midfielder. He doesn\’t add anything to the side and takes chances away from far more exciting and useful players like Luke Ivanovic and Cameron Devlin. He\’s been a passenger in the opening two Asian Champions League matches.

Steve Corica\’s insistence on his 4-4-2 system continues to cause frustrations for supporters. When your two best players aren\’t being utilised properly it completely nullifies their ability. Milos Ninkovic is not a left midfielder, and he won a Johnny Warren Medal playing as a central attacking midfielder. Adam le Fondre continues to make great runs but the ball never finds him. A lot of hoof and hope balls over the top which don\’t really favour the Englishman\’s style.

Kawasaki are a side that likes to pass the ball around with pace, take their time on the ball, and pass it out from the back. Naturally when you\’re playing away in continental football, you try a counter attacking game plan. But Corica just didn\’t choose an XI capable of doing anything on the counter. Caceres takes too many touches, Ninkovic isn\’t exactly lightning fast, so no chances arise from the counter. Once Sydney copped that 82nd minute goal, they played a bit faster but didn\’t do much. Corica used just two substitutes in the 90 (Reza and Ivanovic on) and didn\’t force the issue.

It\’s now been over four and a half hours since Sydney last scored in the Asian Champions League. Honestly, it\’s hard to see where the goals will come from. We just don\’t have any pace on our wings in a 4-4-2. It forces the two strikers to go too wide and meaning there\’s no one in the middle. I can\’t see any reason to not just try a 4-2-3-1 against Melbourne City on the weekend with Ivanovic and Retre on the wings. We\’re just void of pace.

Sydney\’s next match on Sunday against Melbourne City will be a tough match after the travels back from Japan. I imagine we\’ll see a decent amount of rotation against the Victorians, my hope is that with rotation Corica may just see the light regarding certain positions on the pitch and viable replacements.
A frustrating loss to take against the reigning J.League champions, but there\’s still four matches left for the lads to turn it around. The strong performance from keeper Andrew Redmayne is promising – he\’s been immense for us.
Final score: Kawasaki Frontale (1) def. Sydney FC (0)
MOTM: Andrew Redmayne
Follow me on twitter at @jamie_dunkin.
Advertisement