Over the last few months there has been whispers of Sydney FC central midfielder Joshua Brillante leaving the club in hopes of an overseas offer. He\’d been receiving interest ever since he joined Sydney on a three year deal in 2016, with his strong performances in 2016/17 getting the attention of a Polish club, as well as a Belgian club. He was brilliant in that double winning season, and made such a dynamic duo with Brandon O\’Neill. 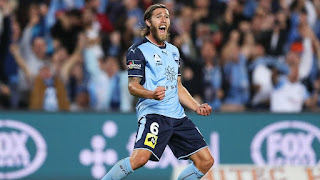 His form the following season was a roller coaster. From October until December he was an absolute rock in the middle of the park, and then his form just fell off from there. He wasn\’t the player he once was.

2018/19 has been an unforgiving season for the Bundaberg born midfielder. A mixture of being found out by opposition and inability to learn from mistakes. He\’s a great player to have to break up the ball, but on the ball he\’s an accident waiting to happen. He\’s been at fault for several goals this season with clumsy turnovers and I definitely felt he had been a hindrance to the team\’s performances.

Over the last month I had received word from several overseas contacts that Brillante had been eyeing a move out. He rejected multiple contract offers from the club after learning of potential interest in Korea. Suwon, Jeonbuk, and Pohang Steelers were the clubs interested in Brillante.

Wednesday saw Brillante completely dropped by Corica after (allegedly) meeting with representatives of clubs whilst in Japan for the Asian Champions League game. Taking himself away from the camp is fairly unprofessional in my opinion, and shows a lack of class and respect for his current club and teammates.

Josh Brillante has also been dropped entirely for Sunday\’s home game against Melbourne City, and I wouldn\’t be surprised if we didn\’t see him in a Sky Blue shirt again. I\’ve had someone reliable tell me he\’s definitely signed with a Korean club and is jetting off to complete the deal.

What does this mean for Sydney FC though?

Well it\’s definitely a loss. Brillante had been a rock in his first two seasons with the club. The lad was so good he won himself Socceroos call-ups off the back of his Sydney performances. When he was in form, he was very hard to play against. His combination with O\’Neill is one of the strongest duos I\’ve seen in the A-League and it was great to watch them play together. I\’ve definitely had my overall opinion of Brillante soured after this whole ordeal. I can deal with players having bad form but not focusing on your team and club during an important continental trip is very unprofessional.

However, this can also be seen as a positive. A new start and a chance to buff up a position causing us some issues. The two obvious replacements are Paulo Retre and Anthony Caceres. I\’d personally go with Retre as he has shown himself to be a top professional, highly flexible, and has a lot more pace which the side has been lacking.

Anthony Caceres (on loan from Manchester City) has been played way out of position at right midfield, but is very capable at central midfield. I think he\’s a perfectly solid player but in his current position doesn\’t really offer much. In his past games for us at central midfield however, he has looked much more comfortable and fairly clean.

Long term, I think this is really good news for Chris Zuvela. Whilst still on the recovery from an anterior cruciate ligament injury, he has shown great promise in his appearances and a good option to take the club forward. I think Zuvela\’s calmness on the ball, ability to play the killer pass, and get stuck in means he\’s a great replacement.

Brillante made 94 appearances for the club, scoring 3 goals, winning 4 trophies, and getting into the Team of the Season twice. His contributions to the club\’s successes cannot be forgotten and he put his all in for the club. I respect his ability and his desire to play overseas but I think personally a move to Korea will only see him return to Australia in 6 months time.

Korea has been harsh to Australian footballers in the past. Only Sasa Ognenovski has great tales of success, whilst many fail to rack up appearances and get frozen out by their clubs. Brillante hasn\’t been playing well enough this season to even arguably start for Sydney FC, I can\’t see him doing the job in Korea in honesty.

The manner of which he\’s leaving the club is very disappointing. I think Danny Vukovic\’s departure after 2016/17 showed true class and respect for the club, and acknowledgement of the fans. This however, feels a bit like a slap in the face.

Thank you Brillante for your contribution, and best of luck in your future.

3 thoughts on “The Case of Joshua Brillante”