During the Graham Arnold era at Sydney FC, the club saw many brilliant players come in. From developing talents like Rhyan Grant, Matt Jurman, and Alex Gersbach, to international talent like Adrian Mierzejewski, Milos Ninkovic, and Marc Janko.

However, in a salary-capped league you need the rotation players. The bench options, injury replacements, and maybe a few clonkers. A-League backup players are of varying quality and varying levels of professionalism about their role in the team.
Once in a while, you get someone who embraces their role in the team as a backup player. For Sydney FC in the Arnold years, that was striker Matt Simon. 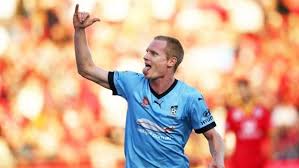 Synonymous with the A-League itself, Simon has been one of the greats as much as many wouldn\’t want to admit it. The forward has scored 50 goals in the A-League (as of time of writing), and played over 200 matches.

It\’s often forgotten how brilliant the young Matt Simon was in his first spell at Central Coast Mariners. A pacy, dynamic, and resilient striker, who played with his heart on his sleeve. I\’d admired him for a long time from a far, and still do, for his work rate and his love of the game.

Matt Simon (then 29) was signed by Sydney FC in August 2015 after being released by the Mariners. Simon was incredibly thankful for Sydney\’s offer to reunite with former manager Arnold. At the time, Sydney manager Graham Arnold said:

\”Matt is quality player and has exceptional personal attributes as well, he gives us something completely different to what we already have up front.\”

What few would have probably predicted when he signed, was how vital he ended up being to the Graham Arnold system. The 188cm tall striker became a fixture of the Sydney FC bench throughout 2016/17, and 2017/18. Need to push on for an equaliser? Get Simon on. Need to defend a lead? Get Simon on. Best bit? He seemed to absolutely love his role.

His absolute dedication to the cause whenever called upon speaks levels of his professionalism and respect. Many players probably wouldn\’t settle for being a benchwarmer getting 10 minutes every week. Not Matty. There was always some cheers around the ground when \”The Wizard of Woy Woy\” was being prepped to come on. You knew he would give his absolute all, and would follow Graham Arnold\’s instructions to a tee.

His finest moments mostly came off the bench,

Who could forget his first goals for the club? Round 4 of 2015/16 saw Sydney in a predicament. Locked at 1-1 against his former club Central Coast Mariners in Gosford, with less than 10 minutes to go he\’s called onto the pitch. Filip Holosko breaks free down on the right flank, with Matty ahead of him. The Slovakian squares it up for Matt Simon, who takes a touch, then curls his effort into the top corner in the 82nd minute.

Minutes later, this time it is Senegalese defensive midfielder Mickael Tavares breaking free on the right wing. He whips in an early cross after spotting the big beam pole Matt Simon heading into the box. Simon then delivers one of the best headed goals you\’ll see to seal a 3-1 for the Sky Blues up on the coast.

Sometimes however, he was just instrumental in changing the game without scoring. In the 2017 FFA Cup Final between Sydney FC and Adelaide United, the choice to sub Matt Simon on for captain Alex Brosque was what changed it. With scores locked at 1-1 in extra time, Simon goes chasing after a long clearance from goalkeeper Andrew Redmayne, before being pulled down by a defender in the first third of Sydney\’s attacking half. He had the ability to win fouls out of his nuisance factor. Opposition defenders looked scared marking him, because you never knew if you\’d cop a stray elbow or be completely skinned by his pace.

What happened from that ensuing free-kick? Adrian Mierzejewski delivers a ball into the box which Bobo heads home to win Sydney their first ever FFA Cup.

If I was to pick a Matt Simon moment to best summarise him as a player, it\’d have to be his winner up on the Central Coast, in Round 24 of 2017/18. Sydney had been 1-0 up for about 60 minutes and looked incredibly comfortable on the ball, until copping an equaliser in the 80th minute from Mariners\’ Jake McGing. Arnold subsequently subs Matt Simon on to try and push for a winner.

In the 93rd minute of extra time, a deflected cross from Paulo Retre found its way invitingly for Matt Simon at the far post for a truly heroic diving header goal to win it. He went for the ball like there was no tomorrow, with risk of likely hitting his head up against the goal post at full diving speed.

The Wizard of Woy Woy, Thunder from Kincumber, Iniesta of the Inner West, Prince of Paddington… pic.twitter.com/sqIIgXpopd

He put his body on the line everywhere. But nothing can better summarise him than that. How many players would have even tried to go for it? Many would have called it a lost cause after the ball had been deflected.

Stuff like this turns a player from \”just a player wearing the kit\” to a cult hero. Someone who you\’ll remember for years to come and always remember the best moments of. As a supporter, seeing a player like Simon push himself to be the difference endears them to you so much. As the famous quote from Arsenal great Tony Adams goes: Play for the name on the front of the shirt, and they\’ll remember the name on the back.

Having met Matt Simon several times I was also impressed by what a really friendly bloke he was. He was incredibly humble about himself, and has made a big impact on me personally. He knows he might not be a Milos Ninkovic or a Besart Berisha in talent levels, but he\’ll bloody well make himself known on the pitch.

His impact on his team mates too is telling. Alex Brosque said he was inspired by Simon to play on for 2018/19 after seeing the enthusiasm and love for the game the Woy Woy local had.

His respect for fans is truly top notch, and I haven\’t seen many players as good as him with interacting with supporters after matches. Been many a story about Simmo being late to leave games due to staying behind to chat to supporters and take photos.

After 2017/18, Matt Simon returned to Central Coast Mariners for a third stint, this time as their captain. After scoring against Sydney in front of the Cove in Gosford, he didn\’t celebrate and paid his respects to the supporters. A month later in the return fixture, Matt Simon got a standing ovation from Sydney supporters as he was subbed off. I really can\’t think of many players who have had a return that good.

In truth, Sydney have been sorely missing someone like him this season. Someone who can really push off the bench when you need to change the game, and inject some passion into the match.

If you haven\’t been able to tell by this yarn, I\’m a big fan of the man. I think he\’s truly one of the most interesting and hell, even inspiring players around. Sometimes passion and love for the game beats flavour of the week mediocre A-League talent.

Thank you for reading this, and I hope you\’ve enjoyed this look into the Albino Messiah. I plan on making more in this series of \”Anatomy of a Cult Hero\” as time goes on.

1 thought on “Anatomy of a Cult Hero: Matt Simon”