Big Blue #49 went the way of the Sky Blues in a game as patchy as the pitch it was played on, thanks to a 93rd minute winner from Milos Ninkovic. 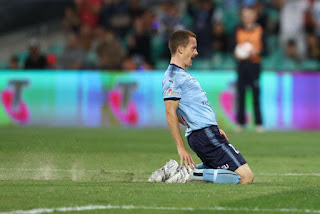 Sydney had a lively start to the game, with Adam le Fondre hitting the crossbar with a chipped effort in the third minute. However it would be Brandon O\’Neill to open the scoring just minutes later, as he collected the ball from Caceres before firing from range into the top corner.

Victory equalised ten minutes later, with Kosta Barbarouses making the most of a failed challenge from Aaron Calver which set him up for a neat chip over Redmayne.

The second half didn\’t start as lively as the first did, with both sides being just as poor as each other on the ball. It looked for all the world it\’d end as a fairly drab 1-1 draw.

However, Milos Ninkovic was there to make sure all three points stayed in Sydney. The Serbian got on the end of a low cross from substitute Siem de Jong, and put a shot in which found its way in with a deflection off Carl Valeri. Just his second goal of the A-League season. Sydney\’s first stoppage time win under Steve Corica.

But what did we learn from the Big Blue?

The pitch the match was played on tonight was truly unacceptable. It was astonishingly poor, and seems to have taken Victory\’s Terry Antonis as a victim. The fact we\’re so used to poor pitches and often laugh it off in Australia is a sad indictment on how we view our own code. I\’ve seen a lot of very poor pitches over the years watching Sydney FC, and it\’s one of the worst they\’ve played on, especially for a match as big as this. I hope in finals series matches Sydney choose to use Kogarah or Leichhardt for home games, as the SCG is clearly not fit for football.

Sydney are a funny team to watch. They\’ve got some truly top class players, and have one of the strongest starting XIs in the league, even with injury issues – yet can\’t quite put together a complete performance. A very strong start to the match, similar to last week against Roar, but fell asleep after the opening 20, like last week. It\’s hard to truly pinpoint why they struggle to have a proper 90 minute performance – there\’s several potential reasons but to me it seems to be fitness. With a lot of players over the age of 30 there\’s just not the same pace to them. O\’Neill always puts in a good shift, as does Grant, but the other outfield players sometimes just look to be haggard throughout periods of the match.

Siem de Jong for the second week in a row has won Sydney points off the bench. Last week it was an assist and a pretty clever goal, this week it\’s a smart cross which somebody actually got on the end of. I think he\’s miles ahead of the A-League overall, and opposition defenders really aren\’t quite sure what he\’s going to do. He might just be the X Factor we need for the finals series, and I\’m hopeful he starts in our next A-League game. 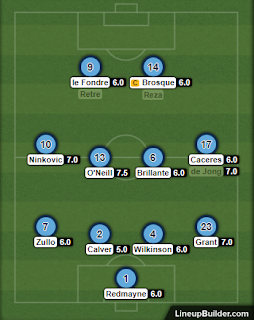 A massive 3 points in the hunt for second spot, with the Sky Blues now 4 clear of Victory (third). Next for Sydney is an Asian Champions League home game against Shanghai SIPG at Jubilee, which has the potential to be a real arseblasting if we\’re not careful. After that, it\’s the Sydney Derby at Sydney Olympic Park – a chance for our first clean sweep of derbies in a season.
Final score: Sydney FC (2) def. Melbourne Victory (1)
MOTM: Brandon O\’Neill
Follow me on twitter at @jamie_dunkin.
Advertisement