Sydney came agonisingly close to their first home win in the Asian Champions League for 3 years, but alas ended up with only a point after a thrilling 90 minutes at Jubilee Stadium. 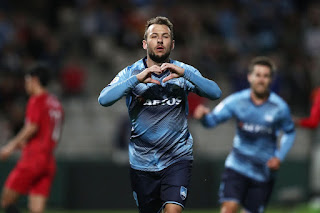 Siem de Jong put Sydney ahead in the opening minutes of the game, with a lucky deflection getting his effort past the Shanghai goalkeeper.

Shanghai equalised 20 minutes later with Brazilian star Oscar getting an assist with a very good ball into the box which was headed home unmarked.

Danny De Silva won Sydney a penalty not long after, and Adam le Fondre thumped home his penalty to give Sydney the lead yet again.

However, yet again, Sydney left a Red shirt completely unmarked for the visitors to equalise yet again.

In the final 10 minutes, Reza Ghoochannejhad\’s goalbound effort was saved, but only for the ball to fall fortuitously for captain Alex Brosque to tap home.

It looked for all the world like Sydney would get their first win of the 2019 campaign, only for Josh Brillante to fall over in possession and have Shanghai score off the back of his mistake. Heartbreaking.

But what did we learn from tonight?

1) All you had to do was nothing stupid

Unfortunately, Joshua Brillante\’s cock-up is just another addition to his string of cock-ups from these last 12 months or so. Yet again he\’s really cost the team, and yet again I\’m left wondering why Corica continues to play him ahead of Caceres or Retre. Corica now has a very big decision to make for the coming weeks: continue to play Brillante in hopes he can somehow magically return to form, or drop him. I think he\’s just a massive liability to the team at this point, and with finals coming up we can\’t risk it. Thanks for those two good seasons Josh, but now is probably time to move on.

Into our fifth Asian Champions League campaign, and I am yet to be truly wowed by the performances of the big spending Chinese clubs in the competition. We have matched them in every campaign, and definitely bettered them more than a few times. If their national champions were struggling and felt need to time waste against a back four of Calver, Wilkinson, Zullo, and Grant then I don\’t think we\’re as far behind as some Asia snobs like to pretend. Sydney FC will always be at bare minimum respectable in Asia, and compared to how other Aussie clubs have done over the years… we might just be the most consistent performers.

Siem de Jong picked up a knock in the first half, but continued into the second without looking like he was struggling much but it does mean there is a good level of competition for places in the current Sydney team ahead of Saturday\’s derby at Olympic Park. I think the front four that started today were very impressive and all deserve a shot at starting on the weekend, maybe with the exception of Ninkovic starting over De Silva, who I see as a very strong bench option.

4) We were bloody good

The most disappointing thing is that we perform like that against any A-League team and we win 3 or 4 nil. We were surprisingly fast on the break, had some really good chances, and looked more than just cohesive up front but nearly deadly. I\’m more upbeat after realising that we actually managed to score 3 goals, something we\’ve only done against the bottom four A-League clubs so far this season.
Overall, it\’s disappointing to have lost after the performance we put in, but I think we\’ve still got signs of life in Asia. I\’m yet to be truly blown away by any of the teams we\’ve played in Asia over these last 12 months. We can definitely get some points away from home, and I still think we can get out of the group.
Sydney Derby up next, and I really am not sure what to expect. Wanderers are almost good at times but also have a back four that concede goals like they\’re going out of fashion. On paper, Sydney should win but something something football is a funny game something something.
Final score: Sydney FC (3) drew with Shanghai SIPG (3)
MOTM: Reza Ghoochannejhad