Sunday sees Perth Glory host Sydney FC in the 2019 A-League Grand Final at Optus Stadium – Perth\’s first chance of being Australian Champions in 15 years – their last success being in the 28th and final National Soccer League season 2003/04 where they triumphed 1-0 away from home against Parramatta Power thanks to a golden goal from Nick Mrdja (remember him?).

2018/19 has been a jubilant year for Perth. Winning the Premier\’s Plate at a canter and playing some great football along the way with some exciting players, plus qualifying for just their second final in the A-League era. It\’s not hard to see how much this has meant to their long-suffering supporters, who for 5 years put up with varying degrees of quality under Kenny Lowe. This season has seen some sellout home games, and now a likely full house on Sunday at Optus Stadium.

Before such a big game, it felt only right to talk to a Glory supporter and get their perspective on the season that\’s been, and the decider ahead. Thank you to fansite The Glory Post for helping out with this – check them out on Instagram and Twitter.

ASOTH: Who has been Perth’s most underrated player in this stunning season they’ve been having?

TGP: I would say Juande. A lot of people underestimate the role he has played in the midfield this season, forming a great partnership with Kilkenny. The fact that he won the \’Player\’s Player of the Year\’ at our awards night shows the respect that his teammates have for him and how important he has been to our success.

ASOTH: Most memorable moment during the 27 rounds?

TGP:  For me it was when we lifted the Premiers Plate against the Jets. Yes, we had a few incredible comebacks and the game itself wasn\’t the greatest, but to see the joy of the players, staff and especially the fans who had been long-starved of success was a very special moment. 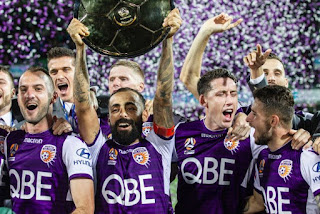 ASOTH: Best performance of the season and why?

TGP: I feel like our best performance was the first half of our Round 12 game against you guys. 3-0 up at the break. That was the best we\’d played for a while and to do it against a club that we\’ve struggled against in recent times, plus the team who was most likely to challenge us for the plate was extra impressive.

ASOTH: How is the city of Perth reacting to this season and the upcoming final?

TGP: Perth has actually been really pumped. It has definitely exposed the bandwagon mentality this state has though. An average home attendance of something around 10,000 and now you\’ve got 60,000 people who will claim they\’ve been behind the Glory the whole time rocking up to the Grand Final. The newspaper has us regularly on the back page with a liftout today I think. While it\’s great to see all the support now, I often think to myself \’Where were you when we weren\’t doing so well and during this season?!\’ If these casual supporters can wear their Glory merch or anything purple (not Freo) and join in with the chants that should be great.

ASOTH: Heading into Sunday, how are you feeling? Predictions?

TGP:  I’m quite confident. If the crowd can create a great atmosphere and the players play like they have all season, then I feel like we should get over the line 3-2.

TGP: How have you found Steve Corica as head coach compared to Arnold?

ASOTH: As far as managerial transitions go, it\’s been mostly smooth. There are some obvious differences between the two like their demeanour in the media but \”Bimbi\” has been more than good enough. Corica understands what made the team work under Arnold and altering it slightly to fit the players he has. There\’s been some frustration from supporters over how predictable he can be as a manager but finishing second in a debut season I think reflects how he\’s gotten the team to work.

TGP:  Who has improved the most this season and why?

ASOTH: For me, it\’s probably Andrew Redmayne. He\’s never quite near the top of people\’s \”best keepers in the league\” list but has proved invaluable throughout this season. When he joined the club he was in a poor rut of form at Wanderers, but worked very hard after Danny Vukovic left to fill that gap in the team. Last year there was a fair few hairy moments with him due to what I\’d say is probably poor communication, to this year being far more commanding and really working on his weak spots like plucking crosses out of the air.


TGP: Which player in the squad do you feel deserves to lift the trophy the most and why?

ASOTH: Despite a lot of the fanfare being around this being Alex Brosque\’s last A-League game and what a great send-out a trophy could potentially be – it really has to be Aaron Calver for me. Calver made his debut at age 16 and never quite got into the first team consistently but whenever called upon did a solid-to-good job. This season saw him get the most appearances he\’s ever had in a single season, and I think that\’s his just desserts considering how much waiting he\’s often done between drinks. Him hitting this recent good run of form I think really shows what he\’s capable of when given consistent minutes – hell he\’s even been scoring goals! 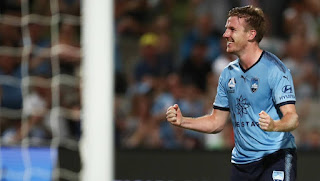 TGP: What has been the vibe between the Sydney fans this week?

ASOTH: There\’s been a pretty optimistic feel amongst a large section of supporters, with a lot of people still riding the high from the big 6-1 win over Victory. Whilst I see it as misplaced optimism personally, I think it\’s actually going to be a decent match in comparison to previous years\’ finals.

TGP: What are your predictions for Sunday? Are you confident?

ASOTH: I\’m more confident about this final than I was for our last away Grand Final in 2015, but I\’m just hopeful that the lads turn up and play to a decent standard. I can\’t see us replicating last week\’s performance and I think Glory are a far better side than Victory so it should be tight. Predicting a 2-1 Glory win.

Thank you to The Glory Post for helping out with this piece, highly recommend checking them out.

Regardless of the result on Sunday, I\’ve been more than happy with how this season has turned out after the losses of Buhagiar and Warland to long-term injuries.

Corica deserves a lot of credit for how he\’s gotten this team to second place ahead of rivals Melbourne Victory and for solid recruitment, youth development, and generally good results. I\’ll probably be writing up a full season in review for both the A-League and W-League seasons after this weekend, as well as working on a few other things.