I\’ve recently come back from a week long trip back to my ancestral homeland England, and managed to sneak in two Fulham games in that period. Already relegated, but wasn\’t ever going to stop me from going to see my familial club.

My Dad\’s been a Fulham supporter pretty much lifelong, having inherited it from his mother who went in the 50s – the era of club legend Johnny Haynes. I inherited it from my Dad, and if you follow Mundial on twitter or Optus Sport, you may have seen the video of the two of us chatting about Fulham back in August.

While the season hasn\’t panned out as hoped for us, it was still brilliant to watch the lads live and in the flesh.

We arrived in England on the matchday of the Bournemouth away fixture, and drove straight there from Heathrow on Easter weekend. Absolute nightmare. What is usually an hour and a half trip from London to the sunny south coast town of Bournemouth ended up being a 4 hour drive.

With the sat-nav plugged in we slowly saw our estimated arrival time nudge up and up, as we got stuck just 6km away. We eventually arrived, I got into the beautiful Vitality Stadium just 5 minutes or so after kick-off for what was dubbed the Relegation Party by Fulham supporters. Hawaiian shirts, inflatables, beach balls, laius and other funny things brought into the stadium by the travelling support.

Honestly, it was absolutely rocking. 1100 of us in a 12000 capacity stadium just absolutely singing our arses off. From ironic chants of \”we are staying up\”, to \”1-0 to the Championship\” after Fulham scored the sole goal of the game.

Despite Fulham serving up some of the worst defending and least inspiring football you\’ll see all season, the supporters forgot about it and really urged the players on to a strong performance. There\’s an undying loyalty that you can feel. The variety of people in the away end too was telling of Fulham as a club. Pensioners, middle aged, young lads, and very small kids all there to follow the club despite relegation being confirmed.

Without a doubt, one of the best things Australian football has going for it is the access to the players. They spend a lot of time post game with supporters taking photos and chatting, and seem more than happy to communicate on twitter and Instagram – being able to send a shitpost to a footballer and have them respond is amazing. Australian footballers are well known for bringing their sense of humour with them wherever they go, and pretty candid. We\’re incredibly lucky to have this in Australia.
However, good bloody luck trying to have any of that that in the Premier League. Players do go to the away end after the game to clap the supporters before disappearing down the tunnel. Eden Hazard does not know any Chelsea supporters, and the fans connection to him is weak, whereas Alex Brosque knows a lot of Sydney supporters well. That\’s a powerful connection.

On social media, European players are so managed and media trained and just don\’t really interact with the public apart from rare examples like my favourite England player Raheem Sterling or in Fulham\’s case left-back Joe Bryan. I think this is a pretty vital part of being a supporter in the modern era, being able to see your clubs players have a laugh and interact with them.

Similar to the access to players in Australia is access to club higher ups and staff – with Sydney FC I can tweet at the club\’s CEO Danny Townsend and most likely get a response. At the 2019 A-League Grand Final he even went to the travelling Cove\’s pub to have a chat with supporters. This is valuable and doesn\’t happen much outside of our country\’s league.

This is where things go beyond being just sporting culture but national culture. Australia likes to see itself as very laid back (which I have mixed feeling abouts) with an optimistic approach to life, whereas there\’s a lot more cynicism in England. Football supporters in England can be annoyingly depressing and scathing about their football club – listening to TalkSport Radio over there can make you think that supporting Man United at the moment is paramount to torture.
The scathing cynicism of English supporters does however produce some of the best comedy and chants. The spur of the moment songs from the stands are witty and often add another layer to the match. You\’re not just singing a setlist, you\’re actively creating new songs and adding to a mythology.

On that away day at Bournemouth, we had chants being sung for players who had been basically bagged all season for not being completely shite on that day. Andre-Franck Zambo Anguissa, Fulham\’s €30m defensive midfield signing (voted flop of the season by FourFourTwo) had a rousing chorus of his name throughout the 90. That just wouldn\’t happen in Australian active support I feel.

I don\’t sit in the Cove for home games due to hope of being able to better watch the match, but during away games I do and I\’ve always been a bit disappointed by how few new chants are spawned in the stands. Things can be a bit too serious for me in the chants from The Cove, despite them all being tunes I hum or sing subconsciously day-to-day.

However, then there\’s an interesting split in the two…

Australian football fans seem to actively embrace the incredibly dumb and funny stuff that happens in our league, far far more than any other league I know. There\’s a sense of pride amongst the hardcore of the A-League that our league\’s big trophy is a toilet seat, that we have giant sauce bottles and palm trees… or basically anything done or to do with Mariners in honesty.

English football and European football often seems so insecure about the dumb and funny things that happen. It\’s so homogenised that the players often seem humourless. I feel there\’s too much of an obsession with making yourself look serious and advertiser friendly. Personally I find the top top leagues of the world to be dull, full of overpaid players and too much money. I\’ve lost a lot of love for European football, and part of it is how serious everyone takes it.

The A-League\’s marketing I think now shouldn\’t focus on highlighting \”amazing football\” and the \”super amazing goals\” but rather the absurd. Football is an inherently funny game and I think we\’d be smart to capitalise on that. The original A-League tag line of \”football, but not as you know it\” is pure genius and still sums up the league fairly well. 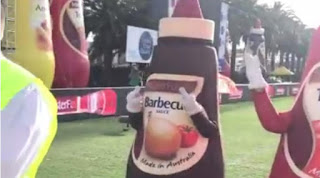 I fear Australian football is complacent with how great and accessible our players are. People bemoan the loss of \”active support\”, but I believe the biggest loss our leagues could see is if we stop our players from the interaction with fans. That is our biggest strength. A-League and W-League should hone in on this in the future. Police and security issues mean active support will remain a mess until a lot changes, but the players and their connection to those in the stands is powerful.

I hope you\’ve enjoyed this read, another one of the \”Jamie rambles about something\” type posts but something I\’ve been trying to put to words for a long time.

Thank you to everyone who has donated to ASOTH via my ko-fi page. It\’s greatly appreciated and I\’m very happy to say it\’s been a year since my first post on here. The support has been so amazing. I\’m working on more things to put out throughout the long off-season – keep an eye out.