So, Australia is out of the World Cup after losing on penalties to Norway in the second round. This has been an interesting tournament to watch for Matildas supporters, with some stunning highs, and now agonisingly deep lows. 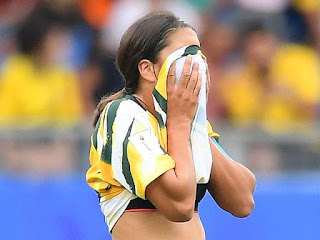 I\’ve been pretty critical of Australian football for how we seem to approach international tournaments, and particularly how naive we often seem to be. Thankfully, I think this tournament proves it isn\’t entirely true.

After losing the first game to Italy with the last kick of the game, Australia got better and showed some proper fighting spirit – I haven\’t seen an Australian national team this hungry for success and to prove themselves. The 3-2 comeback against Brazil isn\’t just the highlight of this World Cup for Australia, it\’s in my opinion the biggest highlight in Australian international football.

From 2-0 down, I was pretty certain it was done for. There wasn\’t much clicking, but thankfully they showed the heart and gameplan to get back into it – and win. I haven\’t seen this from the Socceroos at a World Cup in the last three failed tournaments.

Australia has a \”football nation\” lacks a lot of worldliness and perspective. We love excuses to use when our national teams don\’t win. I still hear people whinging about 2006 against Italy far too often (it was over a decade ago, it was a pen, and even if you disagree it\’s time to get over it). We\’ve often been lucky that there\’s been \”bright lights\” in a lot of these failures – such as Tim Cahill\’s wonderstrike against the Netherlands, or Brett Holman\’s form at 2010.

2019\’s World Cup showed us an Australian side which we can accurately feel a lot of disappointment and frustration at being knocked out in early. That\’s a huge sign of progress in my view. I\’ve seen less talk of this being a \”heroic failure\” and more of it being just a fail which is refreshing. We\’re slowly becoming less accepting of losing with our calibre of players and our high expectations could\’ve been matched this tournament. The squad and game is stronger with us expecting and believing there\’s more to this team.

I\’m very proud of the squad this year. For an incredibly difficult 6 month run in to the World Cup, they\’ve done pretty damn well. We had mixed luck (like every nation) this World Cup with officiating but somehow made it work most of the time thanks to a good fighting spirit and using the famous Matildas \”never say die\” attitude.

I think Alanna Kennedy was extremely unlucky to be sent off, as I don\’t see it as being a \”denying a clear and obvious\” goal scoring opportunity, and there were still several defenders nearby to prevent the \”opportunity\”. But that\’s football. Australia rode their luck for a lot of extra time, and Lydia Williams\’ performance will be unfortunate to not go down in folklore. World class saves one after the other, and the only reason Australia made it to the dreaded penalty shoot-out.

Internet trolls and dickheads have been fairly open with their misogyny since the Matildas took the limelight in Australian sport, and the players have copped significant amounts of abuse – particularly personal attacks against their sexuality. I think Sam Kerr\’s \”so suck on that one\” line after the win against Brazil should go down well in history. Having the national team captain as open as she is with who she is, and defending herself and her teammates with incoming abuse is exactly what I like to see. I think while she still has some ways to grow to become \”the\” captain, she\’s started well and has a bit of fire which works pretty well for me. 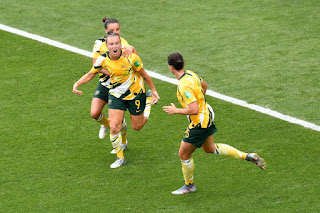 Looking forward, this team has a big Olympics campaign to come in Tokyo next year, and I think they\’ve learnt a lot from this World Cup.

In the meantime, support your local W-League team, buy season memberships, show up to games, and give your support to the players. This is potentially an incoming \”Golden Generation\” the likes of which Australia has never seen. A proper attacking side who score goals and often for fun, and genuinely inspire young kids.

Thank you for reading another \”Jamie rambles helplessly over something\” editorial. I\’ve had a lot of thoughts about this World Cup and it\’s hard to express everything well in text.

As an Australian, I\’m still gutted they\’ve been knocked out, but this isn\’t the end of the journey.

Thanks again to everyone who has donated to me and ASOTH via my ko-fi page. It\’s very much appreciated.