Sydney FC have been quite active over the last month or so, with several key player announcements – both in and out. Let\’s take a closer look at this, and some of the other goings-on at the club. 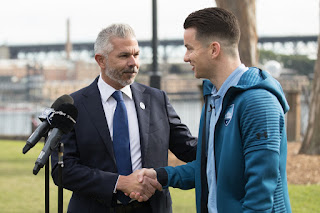 The recent confirmations that Tratt and Devlin would not be staying at the club were very disappointing after how well they performed last year. Devlin in particular looked like a great prospect for the future. I wish Devlin well at the Nix, and hope we see him return some time soon.
Josh Brillante is an interesting one – I wrote a whole piece a few months back about Joshy when he was rumoured to be off to South Korea. What I said then ultimately still feels true. We have more than adequate replacements already at the club, and his form had dropped a lot in 2018/19. It was definitely time for both parties to move on. His choice of cashing in at Melbourne City is a completely respectable choice for his future, but it\’s a step backwards career-wise.
I can\’t see him making it back to his levels from 2016/17 again, but on his day he is a top A-League midfielder. Best of luck to him.
As for the previously confirmed departures from the end of May, there wasn\’t too many shocks. Perhaps the biggest being Jop van der Linden completely retiring from football aged 28 due to injury. He never got into form at Sydney and clearly wasn\’t fit for a long stretch of the season, but it\’s pretty gutting to think he\’s had to stop playing this soon.
Alex Cisak will remain a mystery man forever to us Sydney faithful. Did he ever truly exist? Was he a figment of our collective imagination? Was there ever truly a back-up goalkeeper for Redmayne? Was that actually him for those 8 minutes against Rockdale City? We may never know.

Sydney have been fairly busy in recruitment thus far. As of time of writing, there are 4 confirmed signings for 2019/20.
Kosta Barbarouses was the first new signing, revealed back in June, switching from rivals Melbourne Victory. Barbarouses is a proven goalscorer in the A-League, and managed 15 goals for a side that arguably struggled to truly hit their heights. Whilst not a direct Brosque replacement, he is certainly a bit like a younger Brosque. Pacy, good finisher, and wily. 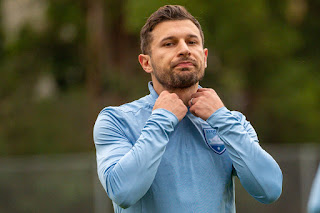 Last week saw ex-Wanderer Alex Baumjohann join. The attacking midfielder was intermittently impressive for them but was a bright light in a fairly crap team. He impressed with his passing of the ball and clearly has a bit of flair, but I\’m not sure he has the defensive side nailed down. So much of the success at Sydney is based off every player doing their defensive duties. I hope in a better team he\’ll be more motivated and be able to truly show how impressive he is.
Next up was the signing of 20-time capped centre-half Ryan McGowan, joining after a career spent entirely overseas – including spells in the Scottish Premier League, English Championship, and League One. A strong signing and definitely a good long-term choice to replace 35 year-old Alex Wilkinson. As a defensive duo I think they\’ll do well, and McGowan has played at a good level for a long time – he should have no issues slipping down into the A-League.
Lastly for now is the confirmation of Anthony Caceres joining on a permanent deal, following a successful loan spell in the back end of last season. A good, versatile player who despite some early hiccups, hit some good from towards the end of his loan. Where he\’ll play on the pitch is up for discussion, as he played as both a central midfielder, and a right midfielder last year under Corica.
Now for some thoughts on a well-publicised rumour: Luke Brattan to Sydney FC. A talented midfielder who has proven himself consistently at A-League level but has always had an air of \”dickhead\” about him. Perhaps a less toxic dressing room atmosphere would greatly benefit Brattan, as it has with other players who\’ve joined us from Melbourne City. Corica has continued a good atmosphere that Arnold started, and I\’m sure \”Bimbi\” can sort out any issues should any arise.

Sydney have confirmed Under Armour as their new kit supplier for the coming years, with a kit reveal on the 24th of July. The kits Under Armour have done over the years for other clubs have been fairly mixed in my opinion. Their kits for Tottenham I really rated, but their stuff for Southampton has been sort of horrible.
A few changes for Sydney in the coaching staff, with goalkeeping coach John Crawley off to Graham Arnold\’s Australia set-up and Matt Nash replacing him. Ufuk Talay\’s departure to become Nix boss has left a vacancy which Robbie Stanton has filled in, with Paul Reid also joining the coaching staff.
Sydney have a blockbuster pre-season friendly coming up against Paris Saint-Germain in China in late July, which is both incredibly well done by Sydney to get organised and also pretty odd. Not often will you see the likes of World Cup winner Kylian Mbappe coming up against Paulo Retre. Looking forward to it.
– – – –
Overall, a productive opening month in Sydney\’s off-season, and now pre-season. Sydney have a home FFA Cup clash to look forward to in August against the rebuilt, Robbie Fowler managed Brisbane Roar to be played at Leichhardt Oval.
A-League fixtures are due out on the 22nd of July from what I\’ve heard, so not much longer to wait now.
That about wraps it up for now, I\’ll write another round-up in about a months time (or sooner) depending on the going-ons.
Thank you for reading this, and thank you everyone for your continued support of ASOTH. Thanks to everyone who has generously donated to the site via my ko-fi page. It is greatly appreciated.
Follow me on twitter at @jamie_dunkin, or ASOTH at @asothdotcom.
Advertisement