Heading into Sydney\’s first competitive hit-out of the 2019/20 season, let\’s take a look into this Sydney side, their preseason so far and how it carries into Wednesday\’s clash. 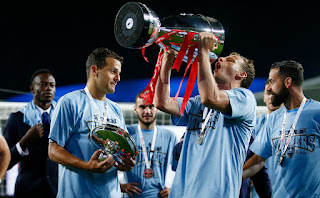 Sydney have had a busy off-season, with a multitude of announcements in regards to the playing squad and coaching staff. Departures of Joshua Brillante, Aaron Calver, Siem de Jong and retiring captain Alex Brosque the most notable. How did Corica respond? With acquisitions of Luke Brattan, Ryan McGowan, Alex Baumjohann, and Kosta Barbarouses.

Corica\’s coaching staff took some hits as well, as  assistant coach Ufuk Talay departed for the Phoenix job, and  goalkeeping coach John Crawley joined the Australia set-up. Paul Reid and Matt Nash their respective replacements. Club legend and in many heads most important man – Terry McFynn, also left the club this offseason to become Perth\’s W-League manager. The loss of \”Tmac\” cannot be overstated. He has been such a huge part of the club, with 15 years of service. I wish him all the very best in Perth.

Opponents Brisbane Roar have been in an absolute rebuild this off-season. First time manager Robbie Fowler has more or less ditched the previous squad and built up a team of journeymen for 2019/20. Additions of note have been Aiden O\’Neill, Roy O\’Donovan, and Brad Inman. O\’Donovan is a curious player – on his day he is unstoppable and one of the finest in the league – however often he can just end up being a frustrated dickhead known for violent outbursts and incredibly dangerous play.

The foreign contingent of Fowler\’s Roar side aren\’t exactly household names – with them all having played in either League 1 or League 2 to varying levels of success. If there\’s one thing you should be able to expect from players from the English lower pyramid is that they\’ll have fitness. Playing 2-3 times a week back in England will mean they have a natural advantage in fitness.

The quality of players is yet to be truly seen, but it\’s an interesting trend having so many British and Irish players coming to the A-League in the wake of Adam le Fondre.

Having recently played in ridiculously warm weather against French giants Paris Saint-Germain a week ago, I think the Sydney lads will be keen for some nice friendly midweek Leichhardt winter weather.
The recent visit to China took five players out ill, with captain Alex Wilkinson, Patrick Flottmann, Brandon O\’Neill, Michael Zullo, and Thomas Heward-Belle all on the sidelines watching on for the PSG friendly. By now they should all be fit and firing to play, and I don\’t see Corica surprising us much with his starting XI for Wednesday.
I\’m very keen to see how Brattan partners O\’Neill in the midfield. O\’Neill from pre-season matches I\’ve seen thus far has had a lot more driving forward and a bit more of a playmaker role than he often was last year. Brattan will be one of several players in line to make their debuts on Wednesday, alongside Kosta Barbarouses, Ryan McGowan, and Alex Baumjohann.
Barbarouses and le Fondre looks like a strong partnership thus far, with a good 45 minutes together against St. George and then some very good football against PSG last week. In particular I am looking forward to seeing Baumjohann on his debut. His performances in the friendlies have been very strong, he looks to be a great signing. His vision, passing, and general ability on the ball is just brilliant.
Ryan McGowan is probably the least flashy of the debutants but an important one nonetheless. Generally any player that has partnered Wilkinson in the heart of defence has done well – Matt Jurman, Jordy Buijs, Aaron Calver, Ben Warland, Jacob Tratt… and now hopefully McGowan as well. A player like McGowan who has spent his career entirely overseas up until this point is a very good get, and long-term will surely be partnering Warland. 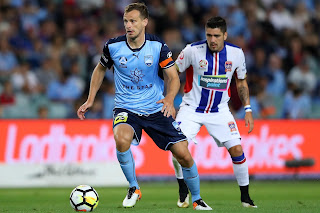 Wilkinson\’s appointment as captaincy should not come as a shock to anyone. I\’m confident he\’ll continue right where Brosque left off, and has plenty of experience captaining teams in the past. O\’Neill and Ninkovic have seemingly been made the vice-captains, both of whom are good choices. Should O\’Neill stay at Sydney, I\’d say he\’s dead cert for captain when Wilkinson retires.
– – – –
How will Wednesday\’s game play out, though? Will Sydney win? I\’d say we\’re favourites as the home team, but Roar\’s side will have a massive point to prove with several players hoping to cement a spot in Fowler\’s side.
Corica has a clear starting XI in mind for this season, and this will be (unless a sudden injury) the first chance he has to play it out. Baumjohann will be pivotal to this match for Sydney I feel, as he could be the X Factor we need for this year. Very happy to have football back, and hopeful we\’ll see a good crowd at Leichhardt which seems a pretty perfect venue choice for an FFA Cup match.
I\’ll be writing a match review after the game, and that will be found on here as well.
Follow me on twitter at @jamie_dunkin, and ASOTH at @asothdotcom.