Sydney escaped with all three points against a resolute and spirited Wellington Phoenix side. 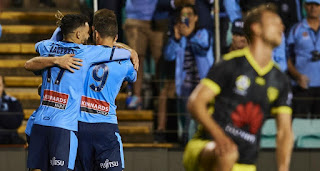 The Sky Blues started the match very strongly, with the majority of possession in the final third, passing the ball around with ease. Some really nice football to watch there for 15 minutes. Brandon O\’Neill got Sydney an opening goal after a Baumjohann corner got stuck in a bit of pinball. Whilst the final touch seems to have come off Barbarouses, it didn\’t stop O\’Neill from claiming it.

After that, Sydney were all over the shop. Not able to clear their lines, passing slowed down, players couldn\’t string many passes together… was very unbecoming of such a talented side. Lucky to still be a goal up at half time, thanks to some heroics from Australian international Andrew Redmayne.

Nix were always going to score, and worked hard for their equalising goal. Inability to clear their lines caused Sydney to concede. A deflected shot finding its way in, 1-1.

It took barely anytime for the tempo to change after that. Minutes after the equaliser, a Brandon O\’Neill free-kick met the foot of Rhyan Grant who managed to loop his effort over the keeper, and into the net. A jammy, but nonetheless fantastic goal from the Mullet Man.

Anthony Caceres copped a potential leg-breaker after a poor challenge from Liberato Cacace which saw the Nix man sent off. Sydney closed out the final 10 minutes fairly well, and hung on for an important 3 points.

But what did we learn?

A bit like last week, Sydney looked great in parts when attacking. Some real fluidity and genuinely pleasing football. Baumjohann was positive when on the ball, but still needs to gel a bit with the other players. The first half was entirely down his right flank, and he worked relatively well with Rhyan Grant. He went AWOL in the second half (much like the rest of the team) and was subsequently subbed off for Caceres.
Barbarouses and Alfie still need some more time together, but they again showed some lightning pace on the break and I\’m very excited to see more of them together.

Back from international duty and back to his commanding self in the box. Some great saves throughout and all I could think of was the immortal words of Jacob Tratt: Thank f*ck for Redders. The save just before half-time, a dive to his left to stop a Jaush Sotirio header was top drawer. I think we\’ve taken for granted just how big he is in this team.

Paulo Retre is a perfect A-League utility player. Can play pretty much anywhere on the pitch and always does a decent job – stepped in at leftback tonight and did a solid job. Unfortunately, he just isn\’t left-footed and that is an issue. Joel King performed very well last week when filling in for Zullo and I feel he was hard done by to not get a start here. For the derby next week it\’d be a tough ask for King, but I think I\’d prefer a proper specialist in the specialist position – with all due respect to Retre.

The first derby at the new Parramatta Stadium is next week. A resurgent Wanderers side hosting a fairly solid and star-studded Sydney. I feel Corica has two very big decisions to make – who starts at left-back, and who starts at right-midfield. Caceres is a very good passer of the ball and has a lot of pace in him, and always does a good job when called upon. Baumjohann look fine thus far but I think he may be better as an impact sub. He\’s got immense talent but I felt he faded out too much tonight.

A truly amazing day out by the bay. A packed house, some beautiful weather, all in a great boutique stadium. I\’m very glad we\’ve chosen to use Leichhardt and Kogarah as our home venues – they are just stunning and the Cove with the club, have done a fantastic job of making them feel like home.
Final score: Sydney FC (2) def. Wellington Phoenix (1)
MOTM: Andrew Redmayne
Not a great performance but a vital 3 points, keeping us top of the table heading into Round 3 – just ahead of Western Sydney. I\’m gutted I\’ll be missing next week – first derby I\’ve missed in the A-League. I\’ll be in Japan for the Rugby World Cup, likely having double brown trousers watching both a semi-final and keeping updated on the derby.
Thank you to everyone who has supported me, and to those who have donated to me. It all goes a long way, and I\’m planning big stuff for this year. Very happy to say I\’ve recently collaborated on a piece for a mate on another website. Should be out this week.
Follow me on twitter at @jamie_dunkin and ASOTH at @asothdotcom.