On an overcast day in Sydney, it still shone Sky Blue as both the W-League and A-League sides triumphed over Melbourne Victory in two tough Big Blues. 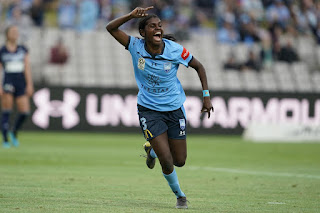 Sydney opened their season with a fairly comprehensive 3-0 win over last year\’s premiers Melbourne Victory. Remy Siemsen scored the opener in the fourth minute, after Caitlin Foord found space and danced into the box, before laying it off for Siemsen who slotted it calmly past Dumont.
The Sky Blues weren\’t on top of the game, but were defensively solid and didn\’t allow Victory much room for anything. Victory were lacking a playmaker and just could not get meaningful chances. Bledsoe didn\’t have much to do ultimately. 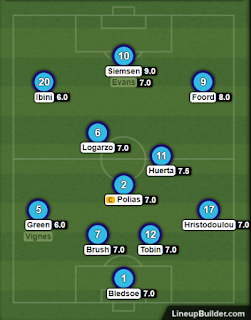 Sydney doubled their lead in the 22nd minute, with Caitlin Foord teeing up Remy Siemsen yet again – this time with a great diagonal cross into the box which Siemsen headed home. Foord was consistently dangerous, constantly running at defenders and finding space, and getting the ball into dangerous areas.
Late in the second half, young Shay Evans was subbed on for Remy Siemsen. She made a great impact on the match, and scored her first goal in the W-League in the 92nd minute. A pinpoint cross found her, and she nodded it home. Cue ballistic celebrations. One of the most special moments I\’ve seen. Seeing a young Aboriginal footballer play and score in the national competition is really something. Historic moment for Shay Evans, indigenous football, and Australian sport. The start of a wonderful career. Glad I was there for it.
An ultimately comfortable win for Sydney, and with so many players still to come back it is very pleasing to pick up 3 points against a full strength Victory side. Next up is a trip away to Adelaide on Friday night. Adelaide were unlucky not to come away with a point in their opener against Wanderers and I expect them (as usual) to be fairly tight. They gained Mary Fowler up front who already looks to be an astute acquisition.
Final score: Sydney FC (3) def. Melbourne Victory (0)
MOTM: Remy Siemsen 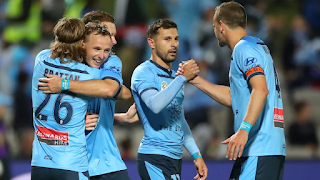 Despite an incredibly poor first half, Sydney came out the other end to claim a priceless 2-1 win over bitter rivals Melbourne Victory. Victory were ravaged with injuries and international call-ups and Marco Kurz set up a highly defensive side.
Ola Toivonen scored for Victory against the run of play just before half-time, and with how dour the match was it was hard to see Sydney getting into it. They just didn\’t play their style effectively.
Paulo Retre found mixed fortunes playing at left-back again, with his ability to win the ball still there, and he is still good at getting forward and getting back – he just isn\’t a left back. Having to turn to your favoured foot every cross is not ideal. Zullo coming on to replace him in the 70th minute was cause for joy, as the leftback returns from a quad injury. 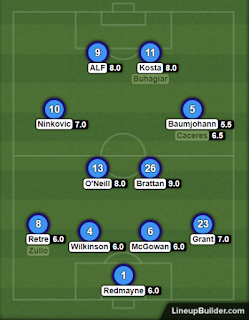 Sydney found the equaliser through Adam le Fondre, with a Brandon O\’Neill corner meeting the head of Alex Wilkinson which squared it for le Fondre to head home. A well worked goal, and yet another one from a set piece. From there Sydney seemed to click a bit.
The eventual winner came about after Sydney really stuck to their playing philosophy. Neat passing in the final third, dynamic full-backs and a good killer ball. O\’Neill involved again as his diagonal ball into the box found the run of Rhyan Grant at the far post who unselfishly squared it for Kosta Barbarouses – whose initial effort hit the bar but was then tapped home. Who else could it be?
Barbarouses was immense in the second half, winning a lot of 50/50s and driving forward alongside his strike partner le Fondre. The two of them are showing some great signs and when they went forward Victory didn\’t have much they could do to stop them.
I\’m still a bit concerned over the performances of Baumjohann at right midfield. I don\’t think he\’s made for the position – at least not when playing very defensive teams. Anthony Caceres did well when he replaced him, and I\’d like to see him start next week in place of Baumjohann.
A very very important 3 points in the long run. Not playing your best and still getting the win is a sign of a champion team – last year we never truly showed up except for the Semi Final and still won the toilet seat. Credit to Corica for an effective team talk at half-time, with le Fondre being involved much more from the outset of the second half.
Luke Brattan I thought put in a terrific shift. Constantly getting involved, played the ball well, and was the only player to perform in both halves. Been very good for us since he signed.
Next up is Perth Glory away. A rematch of the uneventful 2019 Grand Final. Perth haven\’t found much rhythm but always have it in them. Looking forward to it.
Final score: Sydney FC (2) def. Melbourne Victory (1)
MOTM: Luke Brattan
– – – – 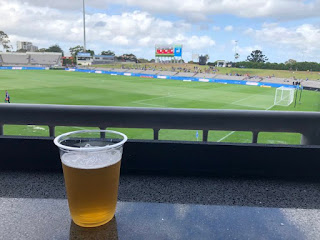 A successful weekend in Sky Blue, with our W-League side top of the table, and the A-League side just a point behind Melbourne City at the top.
Follow me on twitter at @jamie_dunkin or ASOTH at @asothdotcom.
Keep an eye out for more content on both here and the twitter account. Got some exciting things I\’m working on, and really appreciate everyone who chucks a follow, like, read, or retweet to ASOTH.
Advertisement