I recently came back from a lovely weekend in Perth to see friends and follow Sydney FC, watching them in a fairly enjoyable 3-1 win. Unfortunately for most fans, it was marred by the usage of video assistant referee which took up a majority of the conversation post game.

For me, however, what stuck in my head was a poor experience on my way out of the ground which unfortunately something I\’ve grown fairly used to whilst following Sydney FC, and just being a football supporter, and who I am – homophobic slurs and abuse. 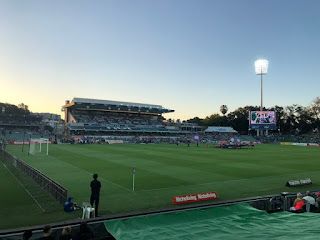 We left HBF Park after doing the celebrations with the players, and made our way around to get to the Brisbane Hotel for post-game drinks. We walked past a group of young men, probably in their mid 20s, who decided to yell \”faggot\”, \”poof\”, and a few other slurs at us. I was sort of unfortunately numb to it as it happened. This has happened far more than is acceptable at football. If it weren\’t for being in a group, I genuinely feared briefly for my safety. A bunch of both pissed off and pissed up young men targeting you is not an ideal situation and took the glow away from what was a big win for us travelling Sydney supporters.

Homophobic abuse has been too commonly experienced for me as a football fan. I\’d previously experienced in the Sydney Derby, away in Adelaide and in Brisbane. I\’m averaging 3-4 incidents of abuse a season. This is just not acceptable and goes against what the strength of the A-League and football is – our sense of community, multiculturalism, and acceptance. Johnny Warren famously titled his book \”Sheilas, Wogs, and Poofters\” which detailed how mainstream Australia viewed and looked down upon football. Football was deemed not a manly game, and for migrants and not \”Australian\” by Australian culture. The fact some people within our game use such terms is highly depressing.

For football supporters in Australia, Johnny Warren\’s book resonated deeply. Generally football supporters in this country are demonised by mainstream media and we need to stick together and protect each other. Every time I\’ve had one of these incidents I feel like the game has betrayed itself and that we don\’t really want football to succeed. In the 2010s homophobia, racism, and sexism has become more and more frowned upon and people more likely to be pulled up for being a dick. But seemingly not in football. We don\’t focus enough in particular on shutting out the homophobic abuse.

I\’m sick of the abuse and I\’m sick of how often this has become a normal experience. I strongly believe football clubs need to take a stronger step to stop homophobic abuse and make football clubs and football communities safe places where abuse isn\’t tolerated. I\’d love to see the A-League, W-League and FFA step up its commitment to Pride in Sport and actively have a round dedicated to standing up against homophobia – similar to how the English Premier League, English Football League, and FA have partnered with Stonewall. Rainbow captains armbands, charity collections for LGBT foundations, and rainbow laces – for just one week at least. Make marginalised people feel welcome and help stop the abuse. Awareness is a powerful tool to stop homophobia and racism, let\’s utilise it.

I remember being incredibly proud of my club, Sydney FC in 2017 when they had members from Flying Bats and Sydney Rangers come onto the pitch pre-game with rainbow flags to celebrate Mardi Gras and show support for the LGBT community. I feel at home when I see a rainbow flag at Sydney and makes me know where I am is an accepting space and that abuse won\’t be tolerated. I want this to become the case wherever I go for Sydney games.

I know I\’m not alone in my experiences dealing with homophobic abuse while supporting Sydney FC or just football. It\’s time we actively challenged the abuse and tried harder, stepped up, and made it clear as a community we won\’t accept it. At the moment, I see the community as neutral bystanders.

Perth has typically always been a terrific away day to do, as the 99% of locals are incredibly welcoming (hell, they invite you to their pub!) and one of my best away experiences was in Perth back in 2016. Whilst I\’m very disappointed with what happened on Saturday night, it doesn\’t detract from my overall view of Perth Glory or the city of Perth or the people.

For this weekend I\’m in Geelong for the Western United away game and really keen to check out Kardinia Park and what Western United is like as an awayday. Hopefully I\’ll see some of you there.

This has been a far more personal post than usual, but it\’d been stuck in my head since it happened. Thank you for reading it.

366 thoughts on “Australian Football and Homophobia”