As the 2010s come to a close, and as Sydney FC celebrate their 15th A-League season I thought it\’d be a cracking time to look back on the last 10 years and pick some of the moments of the decade.

Everything that happened from January 1st 2010 until December 31st 2019. During that period of 3651 days we\’ve seen 5 managers, 4 captains, 3 chief executive officers, 2 Slovakian cult heroes, and 1 unforgettable night in Perth. Here\’s just one the great tales from the decade…

In late January 2010, it looked for all the world like Sydney wouldn\’t be able to get their hands on the Premier\’s Plate – several points behind Gold Coast United (R.I.P.) in 2nd and eternal rivals Melbourne Victory in 1st. For Sydney to have any chance at winning the plate, they\’d need miracles both in their two remaining regular season games (both must win), and in both Queensland and Victoria.
February 7th was the first step for Vitezslav Lavicka\’s Sydney. At \”home\” to Perth Glory at Parramatta Stadium in the city\’s west. Sydney went ahead on 24 minutes after Shannon Cole was tripped in the box, and captain Steve Corica buried his penalty past a then rookie Tando Velaphi. The lead didn\’t make it to half-time, with Wayne Srhoj scoring 2 minutes into first half stoppage time to level it up.
Sydney needed their big men – particularly marquee striker John Aloisi – to step up. Aloisi had underperformed for the majority of his time in Sydney and just could not find consistency. 3 minutes after the break, he had one of the great near phantom goals – his shot clearly went in, crossed the line and all, but was cleared through the side-netting by a Glory defender. A clear goal given (and without usage of video assistant referee).
Yet again, Glory hit back through a young Daniel McBreen in the 80th minute. Sydney looked doomed to draw the match and hand the title to Melbourne Victory. But cometh the hour, cometh the man. Centreback Stephan Keller\’s inch-perfect cross met John Aloisi\’s head, and it flew into the net in the 87th minute. 3 points in the bag. Elsewhere, Gold Coast United (who were then equal on points with 1st place Victory) lost 1-0 at home to Wellington Phoenix. With Victory winning their game that round as well, it all went down to the final day of the 2009/10 – a Round 27 Big Blue.
Whoever the A-League scriptwriter was who set up a Big Blue in Round 27 must have been pretty bloody pleased with themselves when it ended up being the premiership decider. Victory needed just a draw to win a back-to-back premiership. Whilst they were without their captain Kevin Muscat who was rested and struggled without a consistent striker, they still had a star-studded squad with Adrian Leijer, a young Robbie Kruse, Carlos Hernandez, and a very dependable Grant Brebner.
It was a cagey affair to start off with, and claimed Steve Corica as a victim just 20 minutes in. The Sydney captain suffered a hamstring strain and couldn\’t play on. Brendan Gan subbed on in his place, and John Aloisi handed the armband whilst Slovakian international Karol Kisel moved more into a #10 role.
A throw-in for Victory deep in their defensive half found the head of McFlynn, whose header met Brosque\’s, who squared it for Karol Kisel who took on the volley and looped it over a young Mitch Langerak to \”draw first blood\”, as commentator Simon Hill emphatically called. Just Kisel\’s second goal for the club and what a goal it was. 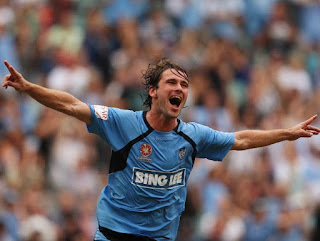 Sydney under Lavicka were a well-oiled machine and workmanlike. A very defence-minded manager, Lavicka boasted one of the best back-fours in the country with Simon Colosimo, Stephan Keller, Shannon Cole, and Sung-Hwan Byun. Sydney conceded just 23 goals that season, and kept 11 clean sheets with the ever reliable Clint Bolton between the sticks.
The Sky Blues stayed firmly in the driver\’s seat after Kisel\’s opener, heading into half-time 1-0 up.
3 minutes after the break, a weak cross-field Carlos Hernandez pass played across the paddock failed to meet its desired target, and was intercepted by Terry McFlynn who knocked it forward towards halfway. Picked up by John Aloisi who took a quick touch, turned past Leigh Broxham and bolted forward. His quick pair of heels powered on, and as he closed down on goal he looked up, and let rip with his trusty left peg with his shot firing into the top corner. Cue Bay 23 delirium. A strike of the highest quality from the marquee, who once again answered the call when needed the most. 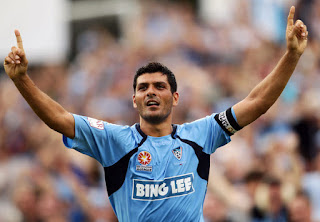 A 2-0 win over our bitter, bitter rivals – pipping at the post them to the premiership at the very death. Not only cementing the Big Blue\’s importance to the A-League – but slowly but surely increasing the importance of the Premier\’s Plate in Australian football.
Never before, and never again, in Sydney\’s history has the biblical phrase \”cometh the hour, cometh the man\” felt more fitting than with John Aloisi. A man who lived for the big occasion and finally delivered in Australia at club level when needed the most.
The annals of Sky Blue history will remember February 2010 almost as its own chapter – it was one hell of a ride as a supporter. Football at its best is moments and situations like in the 2009/10 A-League season. A close title race also brought Sydney a stand-out regular season crowd too, with over 25,000 at Moore Park Road on a wet, windy, and iconic February afternoon in the harbour city.
– – – –
Thank you for reading the first of the \”Moments of the Decade\” series. I\’m planning on publishing one every 2-3 weeks or quicker if possible. I really enjoy the nostalgia factor and I hope you do too.
Thank you to everyone who has supported me via reading, sharing an article, or donating to ASOTH. It\’s all greatly appreciated.
Follow me on twitter at @jamie_dunkin or ASOTH at @asothdotcom. I\’m currently on the lookout for someone to administrate the instagram page for ASOTH. If you\’re interested, send me a message.
Advertisement

4 thoughts on “Moments of the Decade – Zero To Hero”